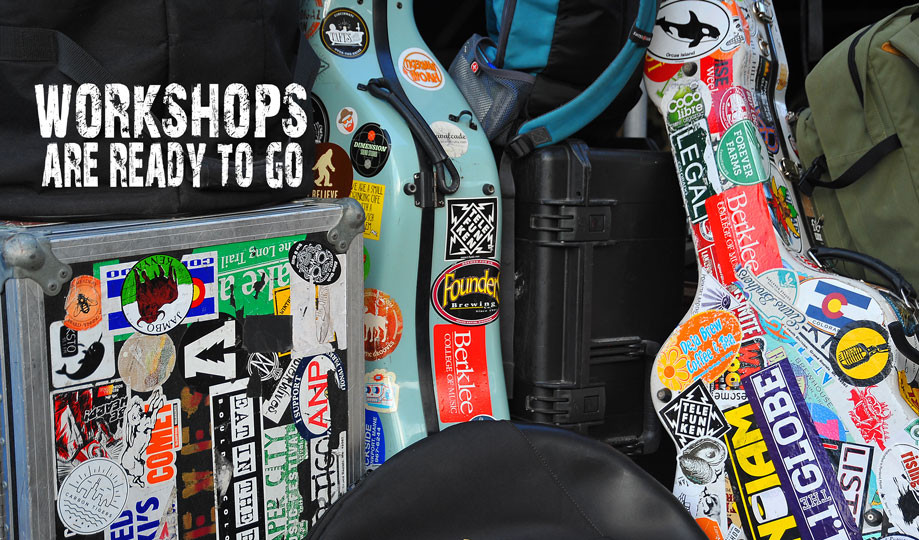 Workshops and artist collaborations account for 50 per cent of day time programming at ROOTSANDBLUES which equates to a combined 24 hours of music at the Shade, Barn, and Blues stages between mid-afternoon Friday, August 18 and supper time on Sunday, August 20.

To say that these thematic performances are integral to the success of a roots music festival is an understatement, as many patrons feel that the workshop settings provide some of the most memorable and invigorating moments at a major festival.

Musicians who have common threads, artists who admired one another from a distance through the years, and players who are being introduced to each other for the first time come together and produce explosive and inspired sets that can never be replicated.

This year, ROOTSANDBLUES organizers feel the line-up will provide those kinds of high impact sessions and they will be front and centre not long after the festival gates open on Friday, August 18 at 3 pm.

Teaming Ricky Skaggs and Kentucky Thunder, with the all-star Celtic trio of McGoldrick, McCusker & Doyle could be one of the hottest unions of the entire weekend. Think of those acclaimed Down the Plank Road recordings that brought The Chieftains together with the best American country and bluegrass artists and that is what The Real Celtic Thunder workshop will mirror. That 75-minute session starts at 4pm in the Barn.

At the same time, two of western Canada’s finest harp players, Dan Shinnan of Boogie Patrol and our own Sherman Doucette will lead a red-hot allstar blues band, at the Blues Stage, through the history of the blues harmonica and reminding us “who contributed what” to the mix over the last century.

Acoustic blues is front and centre right after Skaggs and company exit the Barn stage as Detroit’s Rev. Robert B. Jones, recent Juno-award winner Michael Jerome Browne and Dave Essig reveal the breadth of country, delta, Piedmont, and string band blues in a workshop titled Keep On Truckin’. How’s that for coming out of the gate with three terrific sessions?

Over the course of the weekend, focus will be put on specific instruments at workshop stages. The String Wizards workshop will allow members of Claire Lynch’s Band, three of the hot pickers from Montana’s Lil Smokies and Michael Jerome Browne to run through everything from bluegrass to newgrass over to Cajun tunes to old time country with an impressive arsenal of acoustic instruments.

The history of the West African Kora will be discussed by Zal Sissokho and Toubab Krewe’s Justin Perkins, and the two will also play solo and duets pieces on the multi-stringed instrument at an early Saturday workshop, titled Kora Kora Kora.

Blues piano styles will be bounced about as Kenny “Blues Boss” Wayne and our house band’s Garth Kennedy demonstrate how deep that particular blues well is on Sunday afternoon.

Thematic workshops focusing on songs from various sources are also prevalent in the daytime schedules. The songs of the late and respected Canadian tunesmith Willie P. Bennett will be performed with great respect by Claire Lynch and Stephen Fearing, and workshop host Dave Essig who was Bennett’s producer for his first three albums.

Maria Dunn will be leading a diverse cast of female instrumentalists and singers for the Women of Folkways session that plucks songs from the vast Folkway Records catalogue that continues to influence young roots music artists. Dunn will be joined by Asani, Kaia Kater, April Verch and Dana Wylie.

Livingston Taylor will be hosting a couple of songwriter’s in the round workshops. Who better to do so than a man who has been recording consistently fine and timeless songs since the early seventies when he and his brother James burst onto the folk-rock scene? ROOTSANDBLUES audiences will see that this articulate and passionate performer is one of the most engaging artists of his generation at both the Bright Side of the Road, and The Long Run workshops.

Workshops can become giant jams where artists work without a net.  Expect that kind of high wire and high voltage action in the Barn when saxophonist Jane Bunnett and her all-Cuban female band Maqueque get together with Grammy-Award winning Alex Cuba and his red-hot Cuban band mates for an early Saturday evening session titled Cuban Sandwich.

Traditional folk fans have much to anticipate with Saturday’s Hands Across the Pond workshop that will find McGoldrick, McCusker & Doyle leading an all-star cast that includes Vishten, Andy Hillhouse and two members of the McDades, multi-instrumentalist and singer Jeremiah McDade and his sister, the fiddle playing Shannon Johnson. Then on Sunday, Hillhouse, Maria Dunn and the two McDades, and Irish Mythen but that Celtic spin on a thematic workshop titled Salt in the Air.

With almost two dozen workshops in all, interspersed with numerous stand-alone concerts, ‘where to next?’ should be the mantra for the 25th Anniversary edition of ROOTSANDBLUES.