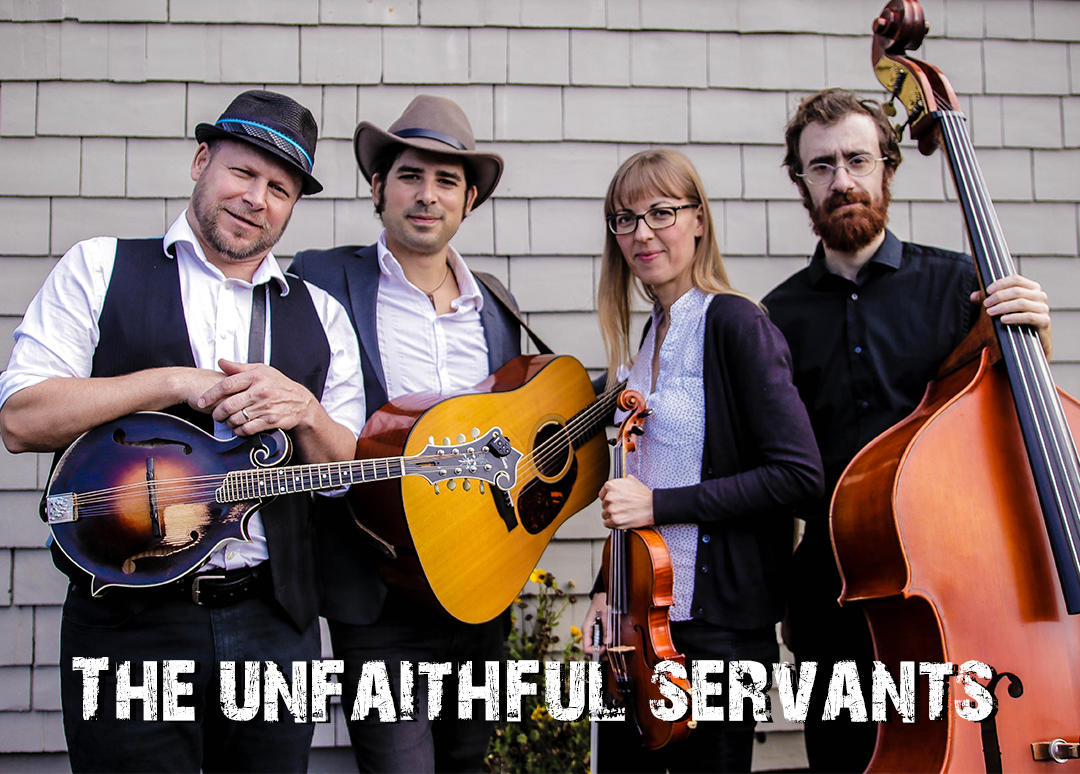 The Unfaithful Servants have quickly gained a reputation in Western Canada as an in demand festival band and a must-see act. With an original and exciting approach to traditional music, the group serves up explosive instrumentals, compelling story-telling and high powered vocals. Formed in the fall of 2017, the band garnered the attention of local music lovers and the music industry with an opening slot for Canadian folkie and Juno nominee Lisa Leblanc, and performances at the Islands Folk Festival, element Music Festival and the Canada 150 celebrations in downtown Victoria. With no formal recording until now, the Servants have achieved much in the past year, and their reputation as a band to watch for grows.

The Servants are excited to announce the upcoming release of their debut album, currently being recorded at Shawnigan Lake Studios with legendary engineer Steve Smith. Steve is known as Seattle’s best mixer with over 42 years of industry experience (Garth Brooks, Pearl Jam, Stevie Wonder, P.Ditty). His credits include numerous platinum and gold albums, as well as 2 Grammy Award winners. The Servant’s album will showcase almost all original material and is set to be released in early 2019, with a tour of western Canada and the US to follow.

The credits and resume of The Servants members are impressive, but it is the chemistry of the group and the skill of their individual musicianship that propels their live performance. Sharing vocal harmonies around a single microphone is an integral part of their sound. Their original writing, from electrifying mandolin and fiddle instrumentals to heartfelt songs, combines well with deftly arranged covers from folk, rock and traditional repertoire.

American born Mandolinist Jesse Cobb could be described as a virtuoso on his instrument.  He is a founding member of the critically acclaimed bluegrass group The Infamous String Dusters, and with that group he received a Grammy nomination for one of his original compositions.  Jesse has recorded and performed with the likes of Bela Fleck, Lee Anne Womack, Dirks Bentley, and Jim Lauderdale among others. He’s performed many times on the historic stage of The Grand Old Opry and has toured the world. His exceptional talent is widely recognized in the bluegrass world, and he is an innovator of the instrument.

Shortly after Jesse’s move to Vancouver Island singer/songwriter Dylan Stone identified Jesse’s depth as a musician and began a collaboration.  Stone is a restless songwriter who is constantly pursuing new sounds and collaborations.  An interesting and storied career has led him to share the stage with  Alejandro Escovedo, open for Keith Urban at BC’s largest country music festival, play onstage with Robert Randolf & The Family Band, and perform his songs for Lou Reed in Nashville, Tennessee.  A modern-day troubadour , Dylan has lived and toured across Canada and toured the West Coast extensively.

Jesse and Dylan’s collaboration grew to include Miriam Sonstenes on fiddle.  Miriam is a founder of beloved Canadian roots trio The Sweet Lowdown, who have won or been nominated for various awards at the Canadian Folk Music Awards, Western Canadian Music Awards, and Vancouver Island Music Awards.  She has studied under bluegrass fiddle legend Bobby Hicks and is a tireless student to her muse.  Jesse’s mandolin and Miriam’s fiddle grace The Unfaithful Servants with sounds both sweet and hard driving. Alex Rempel on stand-up bass solidifies the group with groove and versatility.  Alex also performs and tours North America and Europe with Canadian group West My Friend .

The Servants are pushing forward the limits of traditional music and have a strong foundation of experience and skill to boast. Yet it’s the effort they put in together as a group that moves audiences and attracts their fans. The depth and talent of this group are undeniable and the journey they are embarking upon will be an exciting one to watch.