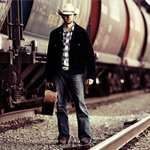 On his latest album for Stony Plain Records Western Star, Tim Hus, an Alberta song-maker and storyteller, tells the truth about driving trucks, hunting dogs, fishing for bass, potash mining and the Church of Country Music. Tim’s a guy who tells it like it is. As straight-up as a Tim Horton’s double-double, he’s been a beer truck driver, a sawhand, a salmon farmer, a tree planter, a cabinetmaker and a well driller, and he’s written songs about most of it. Mentored by the late Stompin’ Tom Connors (he’s did two national tours as Tom’s opening artist and backup band), Tim Hus proudly carries on the tradition of writing songs about working Canadians and Canada’s rich history.

With his Canadiana travelin’ band, he brings his music to small town community halls, major international festivals, and just about every truck stop in between. Tim Hus has been doing this for well over 10 years — Western Star is his fourth album of original songs, and his third for Stony Plain. Recorded in Nashville, Tim had ace producer and session drummer Harry Stinson in his corner for the new recording. Stinson, who has worked with dozens of major artists, brought in an A-list of veteran musicians who contributed to the album.

Musically, this is country with an edge, written and sung and performed with integrity and heart. No false notes, no pretending, no “act” — this is the real thing. Tim is looking forward to standing on many stages over the next year, taking Western Star right across Canada and beyond. Joining him on tour will be his band, the Rocky Mountain Two, featuring Jeff bradshaw on steel guitar and Riley Tubbs on upright bass.

Riley Tubbs is a rancher’s son from Rocky Mountain House, Alberta. He lays down “The finest rhythm in the West” with his distinctive style of double-slap on the upright bass. Everywhere he goes audience’s remark on his ability and virtuosity at operating the “Big Bull Fiddle”.  Riley has been playing music all of his life and is an integral part of the band’s sound. He is one of those rare individual’s who can pick up almost any instrument and play it effortlessly though he has a special love for the doghouse bass.  There is no doubt that Tubbs is one of a kind and also one of the finest roots-country bass player’s in the land.

Jeff Bradshaw is internationally regarded as one of the masters of the steel guitar. He has been a fixture of the Canadian music scene for many years and has toured and recorded with Ian Tyson, Diamond Joe White, Cindy Church, Paul Brandt, Charlie Major, Redd Volkaert, Lisa Brokop, and Gary Fjellgaard to name just a few. Jeff is a very gifted musician and it is an honour for us to have him lend his talents to our brand of Canadian country and cowboy songs.