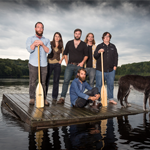 Since the release of The Strumbellas’ eponymous 2009 EP, which was peppered with accolades from Toronto weeklies and prompted a proclamation from the CBC that they are a ‘band to watch’, the six-piece group had been slogging it out, earning their stripes through residencies at legendary Toronto venues The Cameron House and The Dakota Tavern. The band left the proverbial nest in 2012, making new fans with cross-country tours, as well as playing a plethora of festivals including CMW, NXNE, Pop Montreal, Eaglewood and Hillside in Guelph.

The Strumbellas’ 2012 JUNO nominated debut album, My Father And The Hunter, offers a beautiful, harmonious dichotomy between melancholy heartbreak and blow-the- barn-doors-off spunk. The album, produced by Cone McCaslin and recorded at Blue Rodeo’s coveted Woodshed Studio, is the harvest of talented friends, some whisky and a few rounds of euchre. Harmonies, stomps, hollers, claps and gang vocals unabashedly abound as the songs weave compelling stories throughout the entire album.

With their second and latest album, We Still Move On Dance Floors (out in Canada with Six Shooter Records), hopeful lyrics play across the sweeping bluegrass-inspired indie rock music in the single In This Life.   Full of handclaps and gang-vocal harmonies, the song stays true to The Strumbellas’ roots, while giving off a feeling that something new is on the horizon.

For their sophomore album, the Lindsay, Ontario band headed to the woods of the pacific north west, settling in at Bear Creek Studio just outside of Seattle to record with Grammy nominated producer, Ryan Hadlock. It seemed a natural progression for the band, whose dark lyrics about death and solitude crop up amongst beautiful lyrical mindscapes of trees and lakes and home.

“The Toronto-based roots rockers prove you don’t need auto tune and synthetic beats to get people’s feet moving on their sophomore album. The Strumbellas hopeful brand of finely crafted indie music – full of handclaps and harmonies – offers an enchanting mix of folk, bluesgrass and country. This one should earn them another JUNO Award nomination. No gimmicks or shameless promos required.” (Chris Lackner / Post Media)