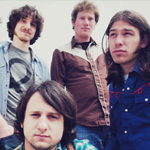 The core of any rock band worth their salt is a deep respect for the fundamentals – a feel that’s redolent of the scare-the-parents, back country, wild juke joint origins – and an abiding drive to carve out one’s own unique territory. The friction between these impulses is where good things happen, and it’s the place San Francisco’s The Stone Foxes –  spear headed by brothers Shannon Koehler (drums, harp, vocals) and Spence Koehler (lead guitar, vocals) ) – have resided since their 2008 debut, young men dedicated to keeping rock engaged and succulently alive.

“You do what the song needs you to do. That’s how this band does it,” says Shannon. “Hell, that’s how The Band did it! You can go back to Muddy Waters and further for examples of this.  With us, there’s this filter of blues and roots that we’ve created by soaking up that music, and when we write everything gets put through that filter. It comes out as who we are today, but everything we do goes through that filter, this cultural fuzzbox.”

The band’s third record, Small Fires, released in February of 2013, is a cohesive, compelling distillation of all the learning the quartet has been doing on the road the past two years since 2010’s Bears & Bulls, an evolution that harnesses their significant firepower with  and wrestle with the idea of conflicts, big and small.

“For sure it’s economically and politically driven, but there are still a few relationship songs in there,” chuckles Shannon. “With earlier albums, we were more concerned with how the music sounded than any underlying themes. This time we took the lyric writing to a new place. I think we’re getting better at defining who we are.”  With producer Doug Boehm (Girls, Dr. Dog, The Vines), The Stone Foxes cut 12 songs in 12 days at Los Angeles’ Carriage House, a whirlwind pace that kept things popping in real time, ideas coming fast and furious, bits of lightning captured in whatever bottle was handy.

On this past tour in support of Small Fires the Stone Foxes put action to their politically driven lyrics by teaming up with SuperFood Drive to help raise awareness of hunger and homelessness in each city they visited on tour.  According to SuperFood Drive 1 out of 6 people  visit a food pantry because they can’t afford to buy food.   50% of these people are children.  This same population also tends to suffer from obesity and chronic illness like diabetes and heart disease. At every show the band encouraged fans to bring healthy nutrient filled non-perishable food, and teamed up with a local food bank where the band personally delivered all the food that was collected at the shows.

While working with SuperFood drive the Stone Foxes embarked on a very unique musical collaboration with food bank and food shelter patrons. “The first recording we did at a shelter was a man named Charles who had lived under a freeway”reports Shannon Koehler, “he sang our song about cold nights in the city. After we stopped rolling, he called me over and told me how much the song meant to him.  You don’t forget things like that.  Goose bumps and watery eyes were the norm at these sessions.  At shelters on tour and at home in San Francisco, people who know hard times have sang with us and shared their stories.  It’s been an honor to listen.  We’re just trying to share their voices.” These special recordings will be released in late November in time for Thanksgiving.

As for right now the Stone Foxes are focused almost solely on writing. “During shows we’ll be trying out some new stuff, “ says Shannon “and then we’ll huddle back in the studio and start cranking the stuff out.  We’re really excited about the sound.  The rock is raw, blues is the filter. We can’t wait to share it in the new year and get back on the road.” The Stone Foxes are preparing to release a new full length album in 2014.