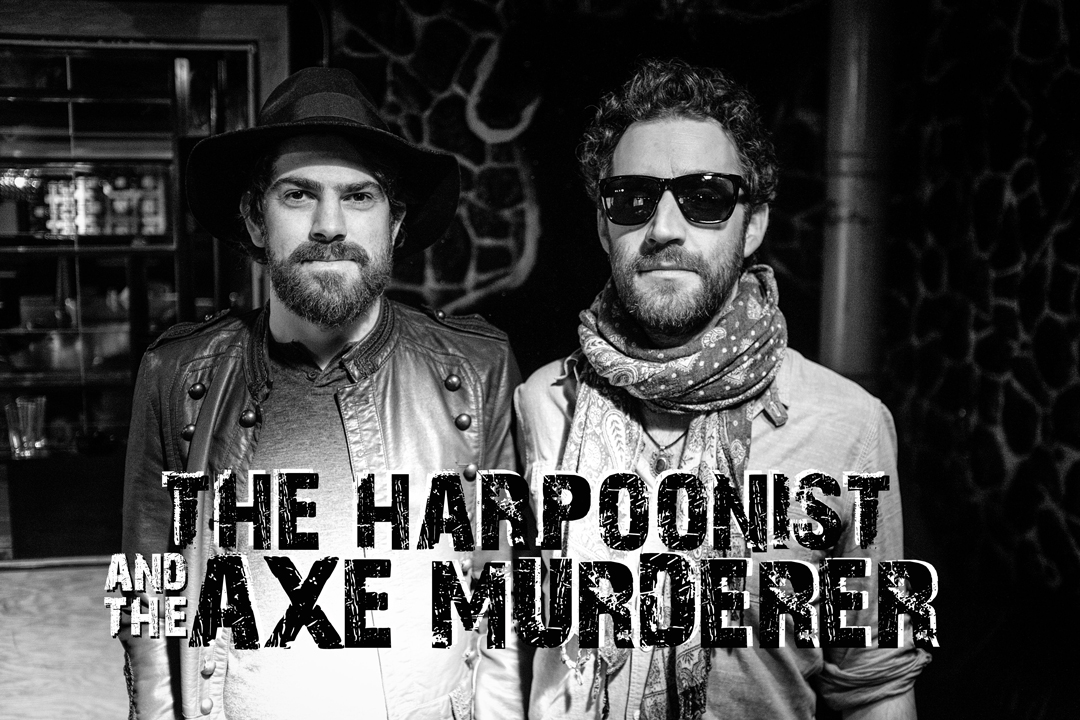 There once was an era when records were made in castles, abandoned airplane hangars, barns, or on a yacht off the coast of the Bahamas, its passengers as high as paper kites. This is not that record! It is an album that came together from the desire for companionship, the endless pursuit of tone, the strength and glue of family, and above all, the love and admiration for each other’s skills. Whether it was operating a tape machine with Jedi precision, creating meals that fuelled us, or belting out glass shattering ohs and ahs, it was the elbow grease of many individuals that brought this project to life. – The Harpoonist & The Axe Murderer

Apocalipstick is the follow up to 2014’s A Real Fine Mess, which received considerable recognition, including a ‘Blues Album of the Year’ Juno nomination (2014) and win for the ‘Blues Album of the Year’ and ‘Alternative Album of the Year’ at the WCMA’s (2015). Their previous release Checkered Past won the ‘Blues Act of the Year’ at the SiriumXM Indies (2013).  They’ve also had songs featured on television shows such as: ‘CSI’, ‘NCIS: New Orleans’, ‘Bitten’, ‘Killjoys’, ‘The Good Wife’, ‘Blue Bloods’, and the aptly named TV movie ‘Lizzie Borden Took An Axe’. Apocalipstick has been mastered by Brian Lucey’s Magic Garden (The Black Keys, Arctic Monkeys, Dr. Dog, Lucinda Williams, The Shins) and produced by John Raham, Shawn “The Harpoonist” Hall, and Matthew “The Axe Murderer” Rogers.

These days it feels like our world is on the verge of collapse. But it’s with near-end times in the breeze that we plunge deeper into the pleasures of sex, revelry and entertainment. Apocalipstick begins with the doom-laden warning call of ‘Get Ready’. Set to a contrastingly bouncy drumbeat, Shawn “The Harpoonist” Hall alerts us to “Get ready for the hard times / Get ready for the heavy load / Get ready for the who knows what”. “Ben Rogers first sang ‘Get Ready’ to us by the piano in the basement of my home,” says Hall. “It was instantly familiar to us and embodied this loose campfire-like group vocal thing, which carried right into the recording sessions. The beauty of this song is the impression of hopefulness it leaves you while layered in a bed of chaos.” With the fate of the world certainly in question, Apocalipstick delves into lustful begging with ‘Pretty Please’, summoning complete heartbreak in ‘Treat Me Kind’, while ‘Nancy’ and ‘Forever Fool’ touch on themes of bullying and revenge.

Framed by psychedelic landscapes and world-ending jam-outs, The Harpoonist & The Axe Murderer ignite the gritty, blues-rock grooves they have been recognized for by adding drummer John Raham (The Be Good Tanyas) and keyboardist Geoff Hilhorst (The Deep Dark Woods) into the melting pot as well as the golden voices of Dawn Pemberton, Andrina Turenne, Alexa Dirks (Begonia), Ben Rogers, Khari Wendell McClelland, Erik Nielsen and Ricardo Khayatte. Add equal parts soulful, sweaty vocals, and biting guitar and you have an album perfect for any doomsday date-night.

The Harpoonist & The Axe Murderer are relentless touring artists known for their high-energy, sweaty, dance-floor-boogying performances. They have recently toured the UK with St. Paul & The Broken Bones, the EU with Dr. Dog and XIXA and the US with Tinariwen. They have also shared the stage with Taj Mahal, Booker T Jones, Mother Mother, The Sheepdogs, and Serena Ryder and have played their fair share of festivals including: Winnipeg Folk Fest, Ottawa Blues Fest, Calgary Folk Fest, Montréal Jazz Fest, Vancouver Jazz Fest, Festival D’Été de Québec, and Regina Folk Festival. 2017 will see the band bringing their bed of chaos to a festival, hinterland and city near you with Apocalipstick (released on March 24, 2017).

“This duo is making some of the most gritty, raw and muddy music north of Mississippi.” ?– CBC

“A gritty and funky treat.” – Exclaim!

“A Real Fine Mess accomplishes everything a good blues record ought to – it’s assertive, organic, and infectious, and continually looks forward while paying homage to the past.”?– Blues Rock Review

Biography sourced from the band’s official website at www.harpoonistaxemurderer.com.