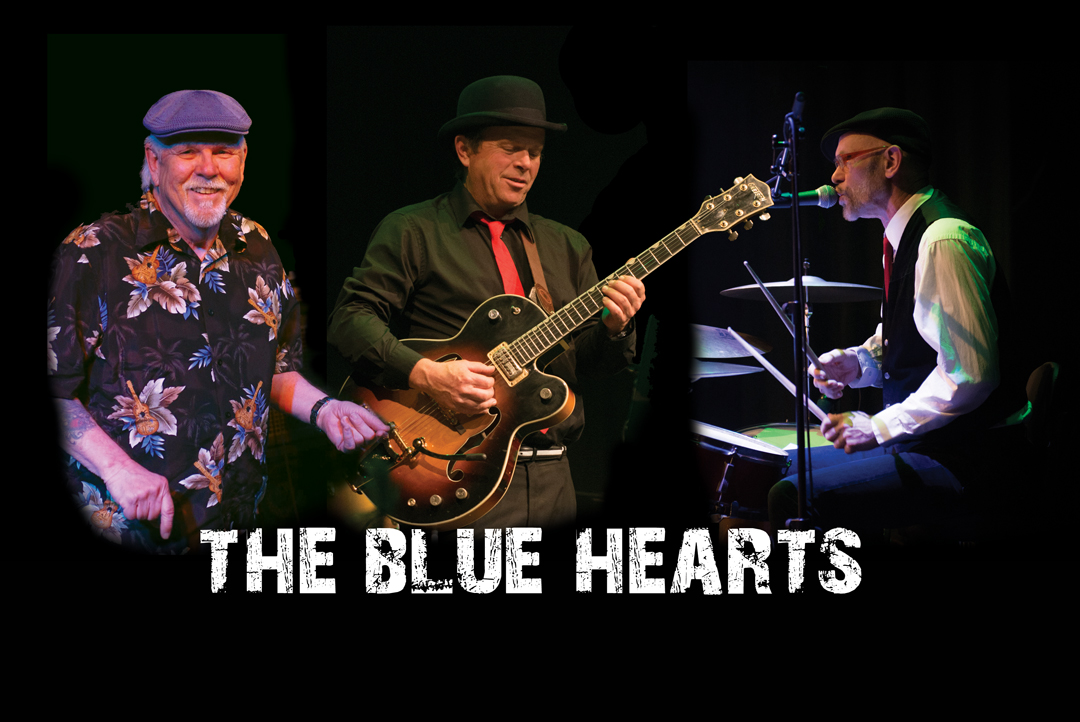 MEET THE BLUE HEARTS
Mark “Westcoast” Comerford: Guitar & Percussion, Vocals and Big Hank Lionhart: Lead Vocals.  Mark and Hank are both members of Uncle Wiggly’s Hot Shoes Blues Band.  Although the Blue Hearts is a new thing for them they bring a ton of experience in the Blues with them.  Both have been playing and recording the Blues for over 40 years with each other and in other Blues bands. In 2015 they went to Memphis to represent BC at the IBC’s in the Band Category with Uncle Wiggly’s Hot Shoes Blues Band and are excited to be returning to Memphis to compete this year in the Solo Duo category as The Blue Hearts. This format allows them to get back to the real roots of the Blues with just Guitar and Vocals. Mark and Hank write and perform their own songs and stay true to the Blues.

MARK “WESTCOAST” COMERFORD
Mark grew up in a musical family and became influenced by the Blues, Folk and Rock music that his older siblings were playing in the 1960’s. After high school he formed a band with a school buddy and together grew passionate about the blues. They made a couple of trips to Chicago to soak in the huge and authentic Blues scene of the time. The highlight was a personal tour of the more famous south side bars including Teresa’s by Blues drummer Clifton James. Mark moved to Toronto and played around the southern Ontario Blues bar circuit. After returning home to Victoria he met Hank Lionhart through an advertisement looking for Blues musicians and together they formed Uncle Wiggly’s Hot Shoes Blues Band.  After Uncle Wiggly’s Hot Shoes Blues band Mark formed the Rockin Devils and played around the Island including backing up Hubert Sumlin on two occasions. As well Mark was a member of the R&B Band Soul Station for a few years.  Aside from the Blue Hearts he currently plays in Uncle Wiggly’s Hot Shoes Blues Band where he is the main song writer and in his own group the Westcoast Blues Doctors.  As well, Mark performs as a solo artist from time to time.

BIG HANK LIONHART
Hank started his musical journey in Edmonton in high school in 1964.  In 1965 he travelled to Seattle, Washington to attend art school and there he sang with a group called the Clouds until 1967.  On his return to Edmonton, Hank joined a band called Coloured Rain toured the Cabaret circuit across Western Canada. In 1974 he joined Edmonton’s premier Blues Band Hot Cottage which cemented his love for the blues. In 1979 he left Hot Cottage and moved to Victoria and formed Uncle Wiggly’s Hot Shoes Blues Band until 1983.  At this point Hank moved to Vancouver, formed and played for 5 years with his band the R&B Toasters then he formed the R&B Kingpins along with Jack Lavin of Powder Blues in the Vancouver area Blues scene for over 6 years.  Hank moved to Edmonton in 2007 and formed Big Hank and a Fist Full of Blues. They had a great run for 7 years when Hank returned to Victoria in 2014 to resume work with Uncle Wiggly’s Hot Shoes Blues Band. Since then Uncle Wiggly’s won the right to represent BC at the International Blues Challenge in Memphis in 2015 and they continue to record and tour around the country. Hank has recorded 9 CD’s over a 50-year career and is remains very passionate about the Blues.
The Blue Hearts is an opportunity for Mark and