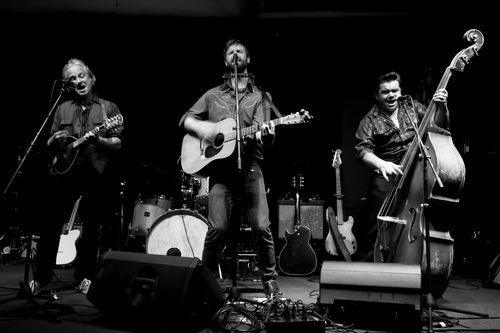 Making a first appearance at ROOTS&BLUES is Calgary’s T Buckley Trio. The Canmore Folk Festival says “There’s enough swing and twang to set your feet moving involuntarily and enough soul and lament to make you want to grab a beer to cry into, but the joy these three bring to the stage will leave those lyrics two-stepping through your mind long after they’ve left the stage”

“The Trio are a tight fighting unit onstage, adept at near telepathic instrumental interplay and able to draw on a formidable list of far-flung originals and cover songs. ” — Eric Volmers, Penguin Eggs

“The trio turn out warm, flowing melodies with a little grit on the edge that taps into a pure vein of country soul.” — BEATROUTE Magazine

“Boom. I turned my head for a second, and a new generation of songwriters popped up in Calgary, shockingly professional and prolific, securing weekly residencies at top venues and the best players in town to accompany them. T. Buckley is one of those songwriters. In a matter of a few years, he has built a solid fan base in the city, toured across the country, and now released his second album…” — Gillian Turnbull, No Depression Magazine

“Buckley’s musical bloom is a beginning, a redemption, like the dawn bruising your eyes in a truck stop after midnight.” — Calgary Folk Music Festival