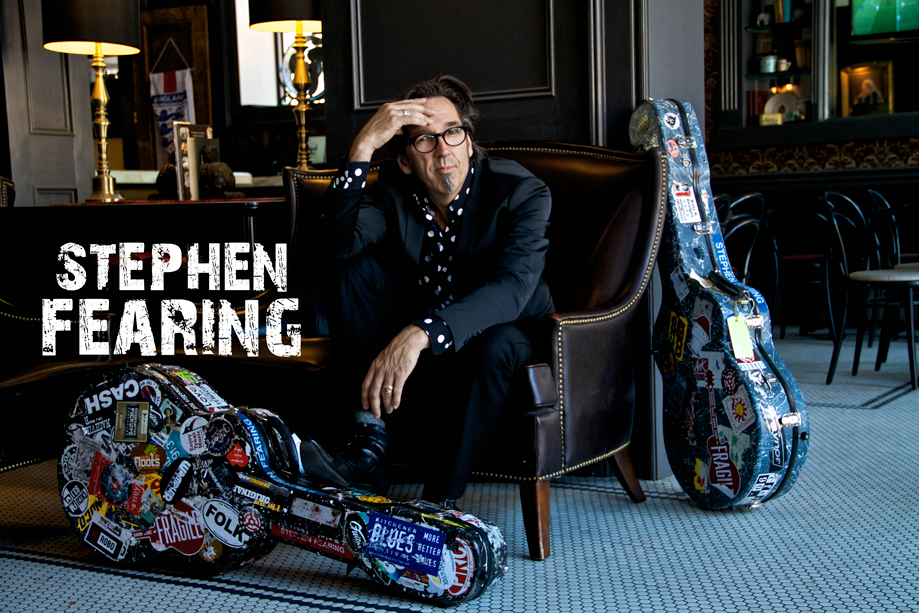 What the people are saying…

Halifax Chronicle Herald — Stephen Fearing was born in 1963 in Vancouver, British Columbia and grew up in Dublin, Ireland where his schoolmates included future members of U2. In 1981, he moved to Minneapolis, Minnesota and immersed himself in the music scene, learning the fundamentals of song writing and performing, while washing dishes to stay alive.

By 1984 he was back in Vancouver, determined to become a professional musician. In the years since, he’s been named as one of the finest songwriters in Canada and has built a national – and international – audience for his music, doing it old school through countless performances at intimate venues and on the concert stages of festivals and theatres across Canada, the US, the UK, and Europe, with appearances at major events like the Reading Festival and WOMAD, to name just a few.

Acoustic Guitar Magazine — In 1996, Fearing, Colin Linden, and Tom Wilson formed a new band called Blackie and the Rodeo Kings to record a tribute album of songs by Willie P. Bennett. Nine albums and one JUNO Award later, the band has become one of the most respected names in North American roots-rock-Americana music.

In 1998, Stephen Fearing met Andy White backstage at the Winnipeg Folk Festival and a fast friendship was formed. In addition to his own work, White is known for his collaborations with Van Morrison, Peter Gabriel, and Sinead O’Connor. As the duo Fearing & White they have released two critically-acclaimed albums and toured throughout Canada and the UK.

Fearing moved from his home in Guelph, ON in 2008, and headed to Halifax, NS. He completed work on Blackie and The Rodeo Kings’ Polaris Prize-nominated Kings and Queens (which featured duets with 14 iconic female singers including Lucinda Williams, Emmylou Harris, and Roseanne Cash). He also got remarried, became a father, and still managed to tour relentlessly.

Fearing has released ten albums as a solo artist, featuring musical guests including: Bruce Cockburn, Margo Timmons, Richard Thompson, Shawn Colvin, and Sarah McLachlan. When not working behind the microphone, Fearing spends time producing records including Suzie Vinnick’s JUNO Award-nominated album Happy Here. “With producing, I really enjoy collaborating with other artists. It’s a blast and, as a bonus, gives me a chance to learn and expand my skill set.”

Like the guests on his albums, the many awards and nominations that have come his way over the years speak to the respect he has earned among his peers, presenters, and critics.

“Blackie and The Rodeo Kings’ ‘Black Sheep’ (penned by Stephen Fearing) is one of my favorite songs from 2011.  Meticulously crafted with deep, resonant writing and featuring vocalist Serena Ryder.  Kind of like The Band recording with Joni Mitchell back in 1970.”

Brew Michaels, OM KRVO, Kalispell, MT — The JUNO Award-winner also shares his knowledge and experience with fellow musicians through songwriting workshops. “The classes dovetail nicely with performing,” he said. “My students are from all walks of life and I enjoy helping to coax them out of their comfort zones to create songs they might not have otherwise found.”

“A master of the finely-turned phrase and the perfectly-pitched line.”

Maverick Magazine — Through a life of many relocations and countless months on the road performing, Fearing has become a gifted storyteller and true musical nomad with the ability to enthrall audiences of all sizes and attitudes. “Getting on stage is the fun part, especially when the adrenaline kicks in,” he says, with a broad smile. “People want to escape and be taken on a journey. I build my shows so they do just that.”