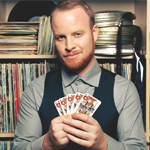 Having rocked the bar many times, Juno nominee Skratch Bastid is now ready to raise it. In 2013, The Bastid has become one of Canada’s most in-demand DJs and respected producers, but don’t think it happened overnight.  From his humble beginnings a decade ago as a teenager in Halifax- pumping out mixtapes from his bedroom and earning a loyal following already back then- he slowly spread his skills first at DJ competitions like DMC, ITF, and Scribble Jam and now around Canada and the world as a widely recognized go-to guy for party-rocking. The illest redhead on turntables has since gone viral. Seriously, youtube that shit.

Since he is increasingly recognized for his comfort and versatility in different styles – hip hop, funk, disco, club, rock, and just about every other genre that will make you dance – more and more people are getting hip to his style. That’s what keeps this Bastid working so hard. Touring city-to-city with a relentless drive, he’s wowed crowds from coast to coast in Canada, the United States, the Caribbean, Southeast Asia, Japan, New Zealand, Brazil and all over Europe as he averages close to 200 shows a year.