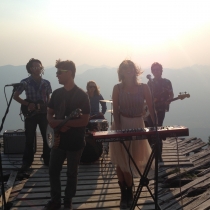 Since the inception of Shred Kelly, the Fernie BC based band have been re-defining what folk-rock means. Through their individual pan-Canadian backgrounds, Tim Newton, Sage McBride, Jordan Vlasschaert, Ian Page-Shiner, and Ty West have amplified the traditional sound of folk music with a more contemporary approach.

Pushing the boundaries of the genre, they have incorporated a wide range of influences to create a sound that is uniquely called ‘Stoke Folk.’ The band is best known for their dynamic, high-energy and engaging live show that leaves no dance floor vacant.

Shred Kelly has garnered themselves sold-out shows across Canada, performed at some of the Nation’s premier festivals, and received a growing list of awards and recognition. They recently won ‘Album of the Year’ and ‘Best Live Act’ at 2015 Kootenay Music Awards and won a 2015 Western Canadian Music Award for ‘Best Music Video’ for their latest single ‘Sing to the Night.’

Shred Kelly released their 3rd album – ‘Sing To The Night’ – on January 27th 2015. The new material shows the growth and depth that the band has explored throughout the creative process, and once again demonstrates their signature claw-hammer banjo riffs, layered ambient synth, powerhouse rock, and sweet vocal harmonies. Their acclaimed producer John Critchley (Elliott Brood, Dan Mangan, Amelia Curran, The Once) from Green Door Studios was a master at creating an album that pushed their creativity and gave Shred Kelly a new take on their signature sound, which translates perfectly onto an album, or a packed dance floor.

“Sing to the Night is a huge step forward for this young group.” – Exclaim Magazine