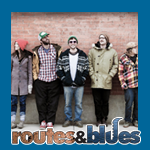 Shred Kelly is a formulation of friends and foot stomping good times born in the East Kootenay’s of British Columbia. Hailing from the town of Fernie, the five piece band is best known for mixing clawhammer banjo riffs that tear the fabric of space and time with ambient synth, high voltage guitar, fierce drums, and hauntingly sweet vocal harmonies to produce a sound that has been properly coined “Stoke Folk”.

While their gritty and fun 2010 album “Goodbye July” still resonates strongly with boot slappin’ slacker anthems such as “I Hate Work” and “Ghost Inside My Head”, their newest full length album release “In the Hills” takes the mountain string band and adds a cup of electric shock, belting out stories of small town love and tragedy in the places they hail from.  Having recently been awarded 2012 Artist of the Year at the Kooteney Music Awards and winning a spot on the Green Couch Sessions/CBC Radio 3 ‘Tracks on Tracks’ train adventure from Vancouver to Toronto, Shred Kelly is turning banjo doubters into sweaty indie folk rock believers on the dance floor, one town at a time.  Festival favourites in 2012 catch ’em at Malakwa Hall August 4th!