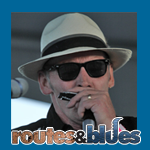 Sherman Doucette’s natural ear for music began developing at an early age.  There were many musical nights of singing and dancing at the Doucette home when he was a young boy.  Family, friends and neighbours would come to join in the fun.  His father played the fiddle and the banjo, his brother played the guitar and his grandfather played the harmonica.  His mother, sisters and aunts all sang and danced.

Sherman left home at fifteen with a harmonica and a twenty dollar bill in his pocket bound for the west coast to Vancouver, British Columbia where he is now a staple of the Vancouver music scene and has been for over 30 years.  He is rated as one of the best blues singer / harp players in the business with past credits including guest appearances with John Lee Hooker, Albert Colins, Pine Top Perkins, Sunnyland Slim, Long John Baldry and many other blues legends.  He has hosted many of Vancouver’s most successful blues jams including the Yale Hotel, The Fairview and the Max. And if you don’t know his music, you will likely recognize his voice from the many TV and Radio commercials he has sung for and played on.