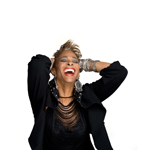 Born in Brooklyn. Raised in Switzerland. A long-time Canadian who lives in Toronto. That’s Shakura S’Aida, a truly international artist whose involvement in the Canadian music scene has been ongoing for almost 25 years.
Shakura takes her music wherever there’s an audience — in 2012 alone she performed in the Caribbean, Moscow, Abu Dhabi, Romania, Switzerland and the United States. The year before that she performed in Canada, the United States, Australia, Austria, Italy, Germany, France, Macedonia, Switzerland and also helped organize a festival in Kigali, the capital of Rwanda. Whether she’s speaking Swiss-German, French or English, Shakura instantly connects with her listeners — and at the same time richly demonstrates the multiculturalism that Canada prides itself on. Shakura S’Aida has been nominated for a 2013 Juno for Blues Album of the Year.