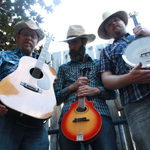 Seal Skull Hammer is a Canadian band that was born high in the majestic mountains of British Columbia. Sprung from once-a-week summer jams on Alton Gowen’s front porch in the sunny Shuswap these three melodious mountain musicians have joined forces,  moving off the front porch and onto the stage,  as the band Seal Skull Hammer.

These three do-it-yourselves of the doctrinal ditty are named for the idea of using archaic tools to build what they need,  the band prides itself on having the lowest-tech gear possible to make their music,  giving up doctored sound effects and synthesizers for home-made instruments and hillbilly harmonies.

They hope to entertain you,  laugh with you,  and send you home feeling better than when you arrived.  So put away your toil,  ease your mortal coil,  put your woes and worries in the slammer and listen to some Seal Skull Hammer.