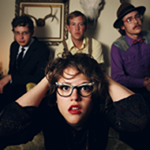 What have these people done to music?” wails Sallie Ford on her 2011 album, Dirty Radio’s explosive opener, I Swear.  She rages against sound-alike pop stars foisted on the public by mainstream media, but it’s a question worth putting to the interrogators, too.  The answer:   Sallie Ford & The Sound Outside as they vigorously mine a sweet spot between modern and vintage.  Sallie’s voice has elicited comparisons to classic jazz and blues icons – think if Tom Waits and Ella Fitzgerald had a voice baby – yet it is stoked with the fire of youth and rebellion too, an instrument capable of conveying raw emotion and nuanced artistry in the same breath.

Their new album, Untamed Beast, is described as visceral rock and roll romp and  it offers a powerful statement on finding freedom through defying conformity.  Through clever (often racy) turns of phrase, Sallie twists traditional notions of gender and genre. She says “it’s time for a girl to infiltrate the boys’ world of rock n roll and grab it by the balls. To me rock n roll isn’t a genre, it’s an energy.” The much anticipated follow up to 2011’s acclaimed Dirty Radio, Untamed Beast dropped on February 19, 2013.