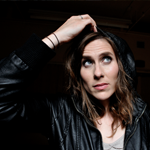 The voice of Rose Cousins is unmistakable.

Originally from Prince Edward Island, she lives in Halifax. She has released three albums We Have Made A Spark (2012), The Send Off (2009) produced by Luke Doucet, and If You Were For Me (2006) produced by CBC in Halifax, as well as singles and recordings in collaboration with artists across Canada, the US, Ireland, Australia and beyond.

Equally unmistakable is the devastating emotions her music evokes. Her songs have appeared in climatic scenes in television shows including Greys Anatomy, Rookie Blue, Heartland, Hope for Wildlife and Drop Dead Diva.

The spirit of collaboration is in everything Cousins does.  Her firm roots in two vibrant music communities (Eastern Canada and Boston Massachusetts) fuel her music with an evolving cast of talented fellow artists. At any show, anywhere Cousins travels, recruits from the local music scene appear with her on stage, be they emerging or well known.

She has garnered awards including the JUNO for Roots & Traditional Album of the Year, 2 Canadian Folk Music Awards for Best Contemporary Singer, 6 East Coast Music Awards, 3 Nova Scotia Music Awards, 3 PEI Music Awards, and a Polaris Prize long list nomination. In America, We Have Made A Spark was named to NPR’s Top 10 Americana & Folk Albums of 2012, and recognized by USA Today, Oprah Magazine, Entertainment Weekly, Folk Alley, Sirius XM, WFUV, WXPN and other media outlets.  In Canada, CBC debuted her short film IF I SHOULD FALL BEHIND about the community in Boston where her album We Have Made A Spark was made.