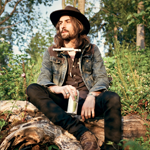 Rolla Olak grew up in Qualicum Beach, a small island community off the coast of Western Canada. Leaving home at a young age to pursue a career in music, Rolla moved to Toronto to play guitar in a touring band. Extensive touring throughout North America and Japan followed. Returning to Canada, Rolla began exploring the studio and songwriting which led to the recording of his self-titled debut album.

Rolla met up with producer Colin Stewart (Dan Mangan, Cave Singers, Black Mountain) to record his first solo album at The Hive in Vancouver. Full of spacious experimentation and heavy vintage guitar tones, the album was used as the soundtrack to the VICE motorcycle documentary “Doin it Baja”.

Upon moving back to the West Coast, Rolla transformed a shed in his backyard into a recording studio where he recorded “WESTERN HEART”, his 2nd solo album. In the quiet confines of the “Tone Shed”, the band played live as Rolla was inspired by great singer-songwriters such as Bob Dylan, Tom Petty and Neil Young. The completed album features eight songs ranging from psychedelic country to classic ‘Crazy Horse’ bar-rock, including a spine-chilling duet with Canadian pop-songstress Louise Burns.

Credited as a songwriter and musician on over a dozen Canadian and UK releases, Rolla Olak continues to play live and record regularly for multiple projects. Rolla is currently booking 2014 summer festivals while working on his 3rd solo album- his most ambitious to date.