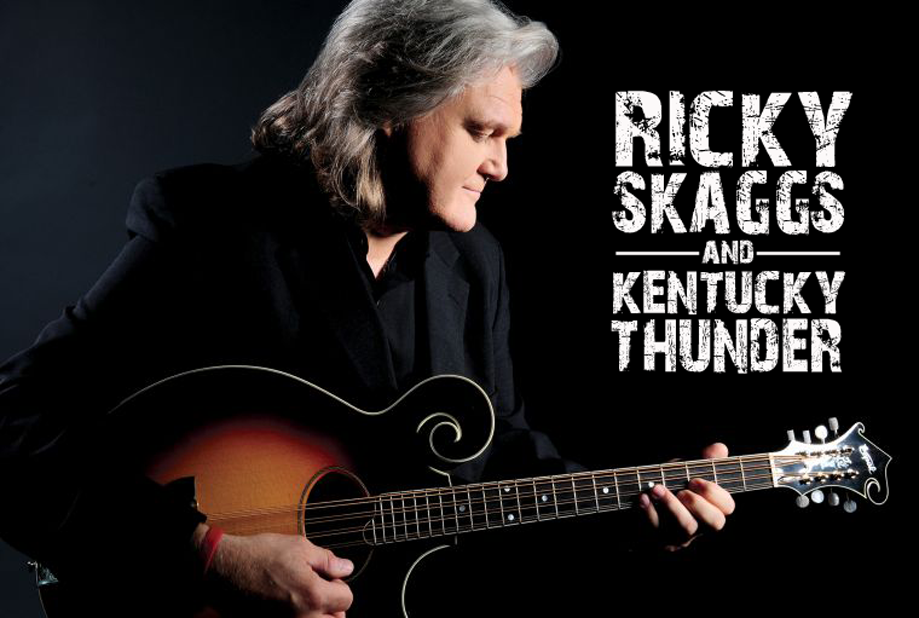 Salmon Arm Roots and Blues is pleased to announce that country and bluegrass music legend Ricky Skaggs and his extraordinary band Kentucky Thunder will be headlining our main stage on Friday August 18 at the Salmon Arm Fair Grounds.

A winner of 14 Grammy Awards, Skaggs has had such an impact on Americana music that it is hard to know where to begin when talking about his almost a half century of performing, touring and recording.

By the time he was in his late teens Skaggs’s abilities in the world of bluegrass were being showcased with J.D. Crowe and the New South, and it wasn’t long before he was invited to become a member of Emmylou Harris’s Hot Band in the late seventies.

By the early eighties, Skaggs had landed a major label deal, served up his first number one country single “Waitin’ For The Sun To Shine” and by 1982 became the youngest artist to be inducted into the Grand Ole Opry.
In a blink the singer and multi-instrumentalist wizard had put together a string of 12 number one hits along with eight Country Music Association Awards. His hits included “You May See Me Walkin’,” “ Highway 40 Blues,” “Don’t Get Above Your Raising,” “Crying My Heart Out Over You,” “Heartbroke,” and “I Wouldn’t Change You If I Could.“

By the end of the century Skaggs had decided to fly his own label up the flagpole, and for the last twenty years the guitarist and mandolinist has operated and recorded for Skaggs Family Records. The Kentucky native also returned to his bluegrass roots at the same time and put together a phenomenal band of brilliant players and pickers, Kentucky Thunder. The group won eight out of nine Instrumental Group of the Year awards from the International Bluegrass Music Association between ’98 and 2006.Skaggs and his ensemble also captured 8 Grammy Awards between ’98 and ’08.

Because he has been such a force for so long, Skaggs was honored with the Cliffie Stone Pioneer Award by the Academy of Country Music in 2012, while the Americana Music Association awarded him a Lifetime Achievement Award in 2015.

As a live performer, Skaggs presents a masters’ class on how to engage an audience on all levels, and the breadth and depth of his musical skill and roots allow him to headline bluegrass, country, Americana, and folk festivals. Along with Alison Krauss, Skaggs can be credited with bringing more fans to bluegrass music than anyone else in the past 25 years, and in the past few years he has also recorded with Bruce Hornsby and toured extensively with Ry Cooder.

Roots and Blues artistic director Peter North says of the Skaggs booking, “that you snap up an artist like Skaggs any time the opportunity comes your way. There are precious few artists in Americana music that have enjoyed the run that he has. . . . This booking continues the vein we started to mine at Roots and Blues with Ian Tyson in 2014 and then Marty Stuart and Russell deCarle of Prairie Oyster in 2015, and Steve Earle and Shawn Colvin last summer. This is country music with soul, and he and Kentucky Thunder are still at the top of their game.”

In addition to closing main stage on Friday August 18, Skaggs and Kentucky Thunder will also be participating in an afternoon workshop that promises to create a lot of sparks.