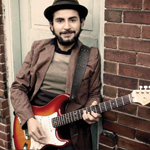 25 years of performing live have seasoned Quique to effortlessly connect with his audiences, be it in an intimate house concert setting or on Toronto’s venerable Harbourfront stage. He breaks down language barriers through his powerful voice and passionate delivery while fusing traditional Mexican styles of music such as ranchera and huapango with modern sounds of rock, reggae, ska, pop, jazz, cumbia, bolero, and a variety of other Latin American rhythms. His lyrics carry powerful messages that are inspired by and support various social and political issues such as human and civil rights, immigration reform, global conservation, anti-racism, discrimination, anti-oppression and Indigenous rights. Despite the distance from his homeland, Quique remains strongly attached to his Mexican roots. He is honoured to be in Canada to share with his audiences a flavour of Mexican culture, heritage and traditions through his music and live contemporary performances.

Quique Escamilla is a multi-instrumentalist, singer-songwriter, and producer living in Toronto. Since his arrival from Chiapas, Mexico in 2007, he has rapidly become a rising star on the Canadian music scene. In 2011, he was discovered by a CBC radio producer and has since become a favourite on popular CBC Toronto shows such as Here and Now, Metro Morning, Fresh Air and Big City Small World. He has been a featured guest at special CBC presentations like the annual fundraiserSounds of the Season —aired live from the Glenn Gould studio—alongside artists like Justin Rutledge, Sophie Milman, Jenn Grant and Michelle Wright. In 2012 he launched his self-titled debut EP, with a concert recorded for CBC’s Canada Live at Toronto’s Lula Lounge Arts Centre. That same year he was invited to open for Michael Franti & Spearhead at the prestigious stage of Luminato Festival. Since then, he has performed at festivals such as Mariposa Folk Festival,  La Falla Festival (La Tohu, Montreal), Shelter Valley Folk Festival, Blue Skies, Toronto Harbourfront, South Country Fair, SunFest, Small World Music Festival, Yonge & Dundas Square, Toronto Bicycle Music Fest and Interstellar Rodeo.

Quique released his latest album 500 Years of Night in April 2014.  Toronto’s CBC Radio 1 show Here & Now premiered and featured Quique’s first single of the album “Presa Fácil” as the SONG OF THE WEEK. Following the release, Quique completed a National tour in late spring 2014 and appeared at festivals throughout the summer.