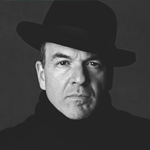 Paul Reddick is a Canadian blues musician and songwriter who has long been a part of Canada’s rich roots music scene. In 1990, Reddick formed the groundbreaking blues band The Sidemen who together released three albums of original material. Based out of Toronto Reddick and his revolving group of players spent a decade hammering out the blues across Canada and the United States.

Reddick began playing the harmonica at the age of twelve and has always been influenced by poets of the past and present. His earliest musical influences were masters of the blues like Charley Patton, Robert Johnson and generations of harmonica aces. Reddick’s music, underlined by his expressive harp playing, is simultaneously a century old and totally brand new. His distinctive voice covers a wide emotional palette, sometimes a shout, more often a conversationally vivid whisper, and always engaging. But it is Reddick’s songs and the passionate way he delivers them that best illustrate what the influential British magazine Mojo described as his “wayward brilliance.”

He has been nominated for JUNOs and Blues Music Awards and he is a seven-time Maple Blues Award winner. In addition, Reddick’s music has been used in a variety of television shows and movies, and — surprisingly, and he still doesn’t know how it came about — in a Coca Cola commercial that has been seen on U.S. TV for two years. He continues to tour, with his hard-hitting band, across Canada, the United States, and Europe and is in demand as a session player — appearing on recent CDs by Kathleen Edwards, Colin Linden, Susie Vinnick, Treasa Levasseur, David Baxter and others.