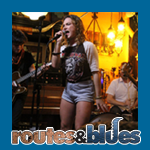 The rats were in the stinkbush, and the city was dying on the vine. Even the mountains had the blues. It was a rain-slicked February Friday, after dark, and I was leaning out, drinking and waiting for something—a sign—as the moon staggered, the streets withered, and the radio gasped a mournful, garbled tune.

And then a sign came. They came, tumbling and wailing, like the sound of windmills burning in the night. They came, like the slow rumble of high stepping, dirty stallions, sweating and champing in the darkness. They came—rhythm, blues, soul, and jazz—rolling down Main Street, with all the vicious swagger of temptation and the undiluted pain of confession…

No Sinner, the Vancouver-based rock and roll quartet comprised of Colleen Rennison (vocals), Eric Campbell (guitar) and Ian Browne (drums), come on with smooth, polished, mineral precision—their sound rooted deep in the tradition of honest musicianship—drawing comparisons to a whole range of musicians from Etta James to Eddie Cochran.

But to simply compare No Sinner to artists from yesteryear, no matter how talented, would be a disservice to the band. As much of a disservice as lazily conjuring up the miasma of whiskey, cigarettes, and sex and leaving it at that. No Sinner is a tight, pro outfit with currency in all the ways that count.

It is evident that each member in the band has put in the time playing and performing purely because of a love of music. Singer and songwriter Colleen Rennison has ground her voice to a sharp, mean, beautiful edge that can cut you down just as soon as charm you. Eric Campbell prowls the frets with the violence and rage of a young beast in the darkling hours. And Ian Browne drums with the rare, fine precision reserved only for those with a true passion for music backed up by years of jamming, gigging, and touring.