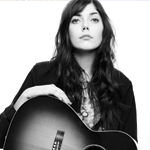 It’s not always easy, even with the gift of hindsight, to say exactly when something started. When the artist side of a person is awakened, making it impossible to continue on the journey that is life without making it an odyssey in music. Perhaps it was as early as when she, aged nine, heard Neil Young for the first time. Or Christmas the year she turned twelve, when her parents gift to her was a guitar. Yes, that may have been when it started, when she started playing the guitar.

Musically, artists she has no demographic connections with, had a major influence on her. Nick Drake, Emmylou Harris, the Irish blues artist Rory Gallagher, and acoustic segments from Led Zeppelin’s portfolio. There is also a strong, almost urgent, craving for something else, something of her own, that she isn’t yet able to express.

At least not until she, at 16, takes part in a singer/songwriter session in her hometown of Bergen, Norway. Just prior to this she sat herself down and wrote “Silly Willy”, a song which is still a part of her live set, and included on her debut album; Boy From The North.

The album contains ten such songs, such stories, ten segments that, despite variations in origin, create a perfect whole. Though blues may be the foundation of many of her songs, her music encompasses equal measures rock and folk. And her satin-smooth vocals have a Nordic coolness that is reminiscent of Ane Brun. Her guitar playing is eminent, and the press have already described her as a guitar virtuoso.