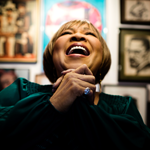 There are few living musicians who can lay claim to being the voice of America’s conscience, and even fewer who continue to make vital music. For six decades Mavis Staples has been the solid rock of American music. Alongside the family group she is so identified with, the Staple Singers, Mavis has managed to transform herself as she goes, yet never alter.

From the delta-inflected gospel sound she helped create in the 1950s, to the engaged protest of the civil rights era, and then on pop radio in the Stax era with a series of soul anthems, she gives voice to others.  Voice to entire movements, to eras, to songs so old their roots are lost, while still managing to work a little P-Funk in there too.

Recently, recognition of Mavis’ unique role in American music has been growing beyond her longtime fans, dipping into the wider world of pop as she performs alongside Justin Timberlake at the White House tribute to Memphis Soul, or with Elton John in a show-stealing Grammy tribute to Levon Helm of the Band.

Mavis Staples is a Rock and Roll Hall of Famer, a Grammy Lifetime Achievement Award winner, and a National Heritage Fellowship Award recipient.  VH1 named her one of the 100 Greatest Women of Rock and Roll, and Rolling Stone listed her as one of the 100 Greatest Singers of All Time.  She has recently been named WFUV’s artist of the year and will be honoured at their seventh Annual Gala at Gotham Hall on Thursday, May 8, 2014.

In 2010 her 13th studio album “ You Are Not Alone”, produced by WILCO’s Jeff Tweedy, won the Grammy Award for Best Americana Album in 2011, adding a remarkable new chapter to an already historic career. On their second collaboration, the Grammy-nominated 2013 album “One True Vine”, Jeff Tweedy has crafted a pulpit from which Mavis lends her voice to a search for grace. It is an album that will both surprise longtime fans and solidify her position at the helm of American music.