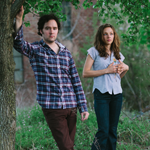 Formed in 2009 in Chapel Hill, North Carolina, Mandolin Orange offers up a heady mix of bluegrass, gospel, folk, country, and pop. Singer/songwriter and multi-instrumentalist Andrew Marlin and violinist/guitarist Emily Frantz met during a bluegrass jam at the Armadillo Grill in Raleigh, NC.

Before long, they were picking up gigs and gaining traction with regional and national audiences alike. In addition to their performance at the 2013 Americana Music Association Festival, Mandolin Orange have played sets at the Shakori Hills Festival, Raleigh’s local Hopscotch Music Festival, and the opening slot on tours for Rosanne Cash, Chatham County Line, Steep Canyon Rangers, and several others.

Partners in music and life, the pair released their self-produced debut, Quiet Little Rooms, through CD Baby in 2010, followed by the ambitious double-album Haste Make/Hard Hearted Stranger in 2011. In 2013 they inked a deal with Yep Roc Records for their third long-player, This Side of Jordan. The momentum is only picking up with 2014 bringing an extensive tour across the USA.