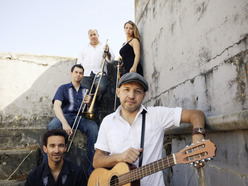 When looking at and listening to, the incredible explosion of what we term “world music” within our country’s borders, the experience and conversation begins with Tom Landa.

The founder of the critically acclaimed Paperboys has also been fronting Locarno for the last few years, a band that finds it’s sizzle in his Mexican roots while incorporating large doses of Cuban Son, Folk, Pop and Funk.

Landa’s goal when putting together Locarno was to create music which is heavily influenced by Mexican music but using the elements and musicians around him in his hometown of Vancouver. A key element to this sound are the partnerships he created with producer Joby Baker who has worked with Alex Cuba, and Miguelito Valdes who lends his trumpet and percussion talents to the project. Miguelito was born and raised in Havana Cuba and has played with Afro Cuban All Stars, Omara Portoundo and The Buena Vista Social Club. Rounding up the group is Sam Esecson on drums and percussion, Kalissa Hernandez on violin and vocals and Nick La Riviere on trombone.

Over the past few summers Locarno has inspired adoring audiences at the Vancouver Island Music Festival, the Edmonton Folk Music Festival, Victoria Jazz Festival, Starbelly Festival and the Calgary Folk Festival and other major events, to dance the night away with the end result being a swirling, sweating, percolating mass of humanity in front of festival stages.

Great collaborators all, Locarno also spearheaded the brilliant BC World Music Collective project at the VIMF in Courtney Comox last summer, which stood as one of the highlights of that festival alongside performances from Graham Nash and Leftover Salmon.

Tom Landa’s brilliance in the world of Celtic Folk music with the Paperboys will also be utilized in ROOTS&BLUES ’16 workshops, as will the formidable talents of his Locarno band mates in numerous side stage sessions.

WHAT THE MEDIA IS REPORTING ON LOCARNO

“Locarno’s approach is so genuine and so welcome for audiences who enjoy great song writing, a respect for tradition, a searching musical curiosity, and virtuoso performance skills. Their compelling blend of Mexican, Cuban and North American popular music delivered with exuberant energy is a winning combination.”
– Michael Juk, producer CBC

Another great Locarno video to enjoy: