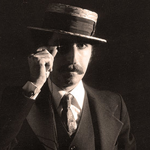 LEON REDBONE is a singer and guitarist specializing in interpretations of early 20th-century music, including jazz and blues standards and Tin Pan Alley classics.

Recognized for his trademark Panama hat, dark sunglasses, and bow tie, Redbone first appeared on stage in Toronto, Canada in the mid-1970s.

Redbone has released approximately fifteen albums and earned a sizable cult following. His concerts blend performance, comedy, and skilled instrumentals. Recurrent gags involve the influence of alcohol and claiming to have written works originating well before his time. He sang the theme to the television series Mr. Belvedere.

While living in Canada in the early 1970s, Redbone began performing in public at Toronto area nightclubs and folk music festivals. At one point, it was rumored that he was actually comedian Andy Kaufman, who sometimes took on other identities, or singer/guitarist Frank Zappa, who somewhat resembled Redbone. However, Redbone has performed since the deaths of Kaufman and Zappa, and the rumors have subsided.

In 1974, Rolling Stone magazine ran a feature article on Redbone, a year before he had a recording contract. The article described his performances as ‘so authentic you can hear the surface noise [of an old 78 rpm].’ His first album, On the Track, was released by Warner Bros. Records in 1975.
He was introduced to a larger public as a semi-regular musical guest on NBC’s Saturday Night Live throughout the late 1970s and into the 1980s.  During the 1980s-’90s Redbone was a frequent guest on The Tonight Show with Johnny Carson.

Redbone usually dresses in attire reminiscent of the Vaudeville era, performing wearing a Panama hat with a black band, dark sunglasses, white suit and black string tie, often while sitting at attention on a stool.

Redbone survived the crash of a small plane in Clarksburg, West Virginia on February 12, 1979. He travels to engagements exclusively by car, saying, ‘I carry around many unusual items and devices. They make life difficult for airport security personnel and flying impossible for me.’