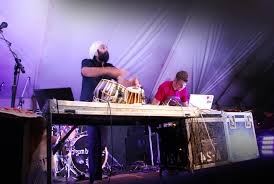 Two classically trained musicians, the tabla playing Gurpreet Chana, aka The Tabla Guy, and violinist Mason Bach, joined forces a few years ago with a vision to create dance music that incorporates tradition while embracing the now and summoning the future.

Integrating their instruments with computer aided performance technology and turntables, these two young players are guaranteed to have the Booge Bar-N pulsating with their uniquely engineered rhythms. It’s a musical equation that delivers a sonically explosive soundscape and one that takes all audiences prisoner.

Chana harnesses custom software to create nuanced soundscapes, drawing from the tabla’s percussive core to sculpt the melodies that drive his electronic compositions. Live, it is a captivating immersive experience, underscored with spectacular responsive visuals. A dynamic fusion of tabla with a bold array of musical styles, which must be seen, to be truly appreciated.

As for Bach, catching him in a live setting is to witness an artist with a seemingly unending enthusiasm for his craft. Trying to stop this man in any way from feverishly bouncing up and down with his violin or over his laptop and arsenal of MIDI gadgets during a show would be a truly unwise choice. The uninitiated can’t help but notice his gleaming ear to ear grin, which lasts from the second he hits the stage until a performance has peaked and come to its conclusion.

ROOTS&BLUES audiences can also expect kLoX to be at the centre of some inspired musical mash-ups.