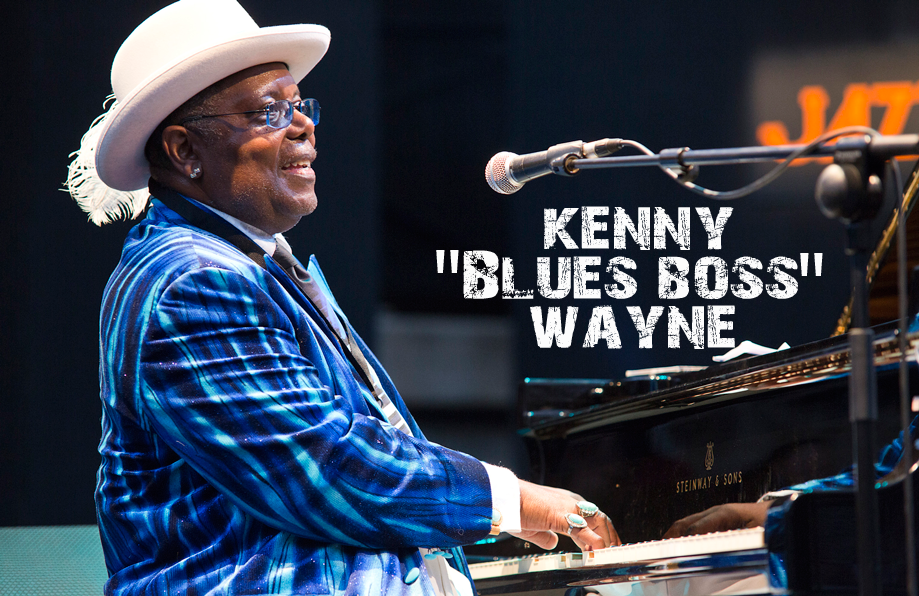 One of the finest blues piano players anywhere, Kenny “Blues Boss” Wayne is on a wonderful roll these days making critically acclaimed albums for Stony Plain Records and traveling the globe playing for adoring audiences in South America, Russia, the UK, and all over this continent.

Just two years ago Wayne was honored as the Most Outstanding Musician (keyboard) by Living Blues Magazine for the second time which sits nicely near his many Maple Blues Piano Player of the Year awards, and his Entertainer of the Year awards from the same organization. Then there’s his Juno Award for Blues Album of the Year from 2006 and his 2012 nomination for the Pinetop Perkins Piano Award from the BMA.

In short, everyone in the blues world has taken notice of this amazing musician for some time now and his destiny would bring him to our country after he spent his formative years in many of the major blues and roots music centres of the USA.

Canada has been good to Wayne and Wayne has given our blues scene a serious shot of magic as he recorded three albums for Electro Fi early in the new millennium before signing with another Canadian label, Stony Plain, in 2011.

Wayne, who now lives just down the road in Kelowna, has just finished wrapping up a new album for the label and we can expect to hear a few new hot tunes from that forthcoming release and Kenny jamming up a storm on our blues stage as ROOTS&BLUES 2016 unfolds.

Find out more about the Blues Boss at Kenny’s official website.

“Veteran boogie master Kenny “Blues Boss” Wayne steps out with this Duke Robillard-produced effort. A showcase for his boogie-blues piano skills, honed in locales like New Orleans and San Francisco, “Blues Boss” Wayne is a soulful vocalist and an electrifying performer, mesmerizing audiences with his spirited barrelhouse-styled key-pounding and flamboyant stage clothing. Think of a cross between Fats Domino and Professor Longhair and you’ll be in the right ballpark.”?About.Com

“There’s no boogie-woogie-blues piano man out there today who pounds the 88’s with the conviction of Kenny “Blues Boss” Wayne.” “An Old Rock On A Roll” once again proves that statement to be absolutely true.”
Blues Underground