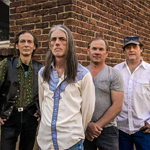 Cowpunk, Alt Country, New Roots… Call it what you will, Jr. Gone Wild are widely acknowledged as the band that collapsed boundaries and paved a road for edgy country rock that has been the trail to fame for the likes of Corb Lund, Neko Case, Blue Rodeo and swacks of other notable crossover artists.

In 1984 country music was dominated by MOR Nashville pap and there wasn’t an established genre or market for what Jr. Gone Wild, kd lang and Jerry Jerry were doing. It combined wheat fields and tractors with a city savvy yet to be recognized in the major music centres.

When prairie punks and college students began gravitating toward this new breed of progressive roots music so, slowly, did the industry. Within a couple of years Jr. Gone Wild signed their first record contract with US indie label BYO (SNFU, Youth Brigade etc) and began the rigors of national and international touring. An independent release, Folk You!, was followed a new deal with Stony Plain/Warner. The band had hit legend status on campuses and beer halls across the nation and Released another 3 critically acclaimed albums before disbanding in 1993.

18 years passed, and the band got back together after much pressure from a local promoter and fans, who have unprecedented access to the band via social networking….there wasn’t much internet last time Jr Gone Wild was playing around the country, and they are finding it an interesting and dynamic tool.

The current lineup includes Mike McDonald on lead vocals and rhythm guitar, Dove on bass, Steve Loree on lead guitar, and Larry Shelast on drums. Their 3 hour reunion show blew everyone’s minds…they might look a little older, but they are playing like it’s nobody’s business…