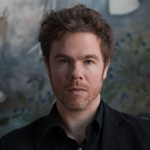 Renowned singer-songwriter, guitarist and author Josh Ritter was interested in music as a child but it wasn’t until, as a teenager, he first heard Johnny Cash and Bob Dylan singing “Girl from the North Country” that his passion was ignited.  “Hearing that record was like meeting the person you’re going to marry,” Josh says. It was after this that Ritter bought his first guitar. While attending college Ritter fell in love with the songs of Leonard Cohen and Gillian Welch and dropped his neuroscience major in favor of the pursuit of music. After graduating in 1999, with a self-created “American History through Narrative Folk Music” major, he recorded and released his self-titled debut.

Ritter also began to perform locally in and around Boston, where he was spotted by Glen Hansard of The Frames. Hansard invited Ritter to record in Ireland with the band. However, it was 2002’s Golden Age of Radio that got him noticed. Signature Sounds Recordings soon picked the album up, gave it exposure on a national level, and the four- and five-star reviews started rolling in.

Over a 14 day span in 2003, Ritter recorded his third album, Hello Starling. His much anticipated follow up, Animal Years, arrived March 2006. This was also the same year Paste Magazine named him one of the “100 Greatest Living Songwriters” alongside names like Dylan, Springsteen and Neil Young. Shortly after saw the release of The Historical Conquests of Josh Ritter (2007), So Runs the World Away (2010), and The Beast in It’s Tracks, realesed on Pytheas Recordings, March 5 (2013).

Recorded during 2011-2012 at the Great North Sound Society in Parsonsfield, Maine, The Beast In Its Tracks continues Ritter’s longtime collaboration with producer and keyboard player Sam Kassirer.  Of the record Ritter says, “In the year after my marriage ended, I realized that I had more new songs than I’d ever had at one time. Far from the grand, sweeping feel of the songs on So Runs the World Away, these new songs felt like rocks in the shoe, hard little nuggets of whatever they were, be it spite, remorse, or happiness.”As Josh describes, “I hadn’t composed this stuff, I’d scrawled it down, just trying to keep ahead of the heartbreak. They needed to be recorded like that. We needed to work fast, make decisions quickly, keep the songs as spare as they could be kept, and above all never allow ourselves to blunt the sharp edges. Some of the songs were mean or evil. So be it.”