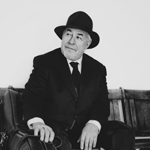 American-born, Canadian by choice, Jim Byrnes may be best known for playing ‘Lifeguard’ on the CBS series Wiseguy (1987-1990), and Joe Dawson in the syndicated series Highlander (1993-98). A handsome man, often bearded, Byrnes lost both his legs when, while helping push a stalled truck on a highway, he was hit from behind by a car. After recuperating, he pursued work as a musician, and it’s the music that has had the most serious impact on his life- filling his need to be constantly creative.

Born and raised in St Louis, Jim grew up on the city’s north side. One of the neighbourhood bars had Ike and Tina Turner as the house band. As a teenager going to music clubs, he and his buddy were often the only white people in the place. “We never had any problems. We were too naïve, and had too much respect for the music and culture – they knew it, they could tell.” Starting piano at age five, by thirteen he was singing and playing blues guitar. Over the years, he has had the good fortune to appear with a virtual ‘who’s who’ of the blues– from Muddy Waters and John Lee Hooker to Taj Mahal and Robert Cray. Byrnes moved to Vancouver, BC in the mid-70s after years of drifting, working odd jobs and playing music. In 1981 he formed the blues group, The Jim Byrnes Band, and began playing dates throughout Canada. The band released three albums: Burnin’ In 1981, followed by I Turned My Days Into Nights in 1987 and 1995’s Juno-Award winning That River.

In 2004 Jim hooked up with Steve Dawson, one of North America’s most critically acclaimed roots music producers. Together they created five outstanding albums: 2004’s Fresh Horses, 2006’s Juno Award winning House Of Refuge, 2009’s My Walking Stick, 2010’s Everywhere West, a salute to Jim’s origins and influences, and 2012’s I Hear The Wind In The Wires, an album of songs from the golden age of country music. Jim and Steve were back at it again in 2014 with St. Louis Times Byrnes’ most personal record to date. Reminiscences of his childhood home of St. Louis are expressed through original compositions as well as versions of songs he grew up with that were recorded by St. Louis musicians. By revisiting songs associated with Chuck Berry, Stump Johnson, Little Milton, Peetie Wheatstraw and more, Jim Byrnes shares an intimate musical journey through a world that has passed by. Although the 250th anniversary of the founding of St. Louis and ten years of partnership with Steve Dawson may have been the original motivation for recording St. Louis Times, the sheer joy you can hear in the music is the real reason to celebrate. Jim Byrnes is a living musical treasure and St. Louis Times is his best record yet, and that’s saying something.