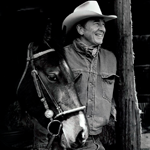 Ian Tyson, Canada’s iconic singer and songwriter– turned 80 in September 2013, but his energy remains undimmed. He is also celebrating the complete recovery of his voice, badly damaged six years ago. Ian was forced to learn, with courage and craftsmanship, to sing with what he called “my new voice.” Two superb albums, Yellowhead to Yellowstone (2008) and Raven Singer (2012), saw a wide range of new songs presented in an intimate, arresting and heart-to-heart voice.After surgery to remove vocal polyps in late 2012, followed by intensive vocal therapy, Ian’s voice is as golden as ever.

That Ian Tyson, at 80, leads two busy, vigorous lives is remarkable enough. Yes, there’s the ranch south of Calgary, in the foothills of the Rockies, with fences to mend, quarter horses to train, cattle to move, land to conserve. And, yes, there are concert stages — from Elko, Nevada to Billings, Montana, from San Francisco to Toronto to New York to Winnipeg and Edmonton and Los Angles and — in any given year — another 30 or 40 cities, including headlining at the 22nd Annual Salmon Arm Roots & Blues Festival.

All of that would seem enough for any one man, but in the first dozen years of the 21st century, he’s released five albums, filmed a music documentary for Canada’s Bravo! television channel (which has earned two international film and television awards), and issued This is My Sky, a two-DVD concert video. Two years ago, he penned a surprising autobiography, The Long Trail: My Life in the West, which continues as a best-seller— it’s sold close to 30,000, copies so far.

As a songwriter, Ian Tyson’s songbook has been mined by his peers for half a century and that expanding songbook will be his lasting legacy despite his international success as a performing and recording artist. Four Strong Winds alone has been recorded by a remarkable cast of artists that includes Neil Young, Johnny Cash, Tony Rice, Waylon Jennings, Judy Collins, Bob Dylan, Marianne Faithful and Blue Rodeo. Suzy Bogguss, Jennifer Warnes, Nanci Griffth, David Bromberg, Tom Russell, Ramblin’ Jack Elliott, and The McDades are just a few of the artists who have recorded other Tyson-penned gems including Someday Soon and Summer Wages.

He has continued to be honoured for his achievements. After numerous Canadian Country Music Awards, membership in the Juno Awards Hall of Fame, he has three honorary Doctorates, and is proudly a member of the Order of Canada.  “Four Strong Winds,” in 2006, was chosen Canada’s #1 song of the 20th century by CBC listener. Meanwhile, the songs and stories keep coming and they remain as true as a well-worn saddle. His newest collection is All the Good ‘Uns Vol 2. He continues to supervise his working ranch in southern Alberta as he reflects on a five-decade musical career which has produced some of the most beloved modern cowboy songs.

As a national icon and living legend, Tyson’s Saturday, August 16th performance at the 2014 Roots & Blues is sure to generate memories that will last a lifetime.