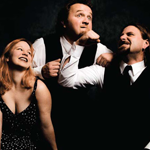 Heather Blush and The Uppercuts, a trio of rogue troubadours who knock the socks off every new audience they meet. Based in Calgary, Alberta, their sound can be described as somewhere between the Adult Alternativestyles ofSarah Slean and Sarah Harmer, and Ella/Louis-style vocal jazz/blues. Heather’s voice is often compared to Norah Jones and Maria Muldaur. With energetic, audience-engaging shows, she is quickly becoming known for songwriting that covers all bases between witty sarcasm and gut wrenching honesty. With “Captain” Steve Hazlett on drums and recently a rotating cast of stellar upright bass players, this trio packs a punch and leaves a lasting impression.

The ensemble’s first album was released in June 2008. Vice is a collection of twelve songs focusing in on various vices, including the usual suspects (alcohol, bad relationship choices) and some surprises (music and travel). Only a year after Vice came out, Versa was released as a follow-up album. It is of course the antithesis to Vice, and explores the lighter side of life. Both albums have been well-received across Canada on CBC radio, as well as university and independent stations.