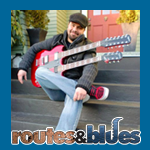 This undeniably bright star of the Sta’atl’imx Nation from the interior Lillioet British Columbia has earned his artistic integrity. His debut album, Just Where I’m At (2000), garnered international recognition, establishing him as a respected singer, songwriter, guitarist and performer, winning Best Male Artist and Best Rock Album at the 2000 Canadian Aboriginal Music Awards. The video of its popular single, “Young Enough,” reached the Top 5 on the coveted Bravo Video Hit List and the Top 10 on the Much More Music chart and won Best Music Video Award at the 2002 American Indian Film Festival in San Francisco.

Surrender promises no less, receiving early recognition with a nomination for Best Video for “You Got It” at the 2010 Aboriginal People’s Choice Awards. This collection of unique and distinctive original songs re!ects a deeply felt musical statement of change, growth and maturation. “It’s about being vulnerable to the experiences that make us human and real,” George explains. “Letting go … To free yourself from judgement in order to evolve.”

And evolving he is, into one of the most exciting Canadian artists today. His talent is undeniable. His stage presence is passionate and full of expression and his connection to the audience is unwaveringly sincere. He is the real deal.