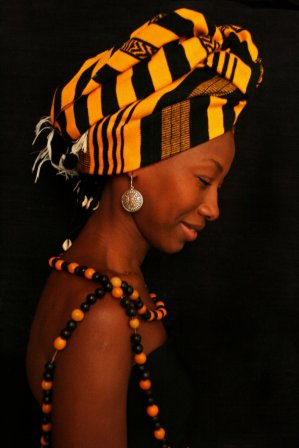 Introducing a fresh new talent with a unique sound, a bagful of beautiful self-penned songs and a tumultuous life story behind her, Fatoumata Diawara’s debut album, ‘Fatou’, was released on World Circuit on September 19, 2011.
Tall, superbly poised and elegant, with an iridescent smile, this sometime star of African film draws elements of jazz and funk into an exquisitely sparse contemporary folk sound – refracting the rocking rhythms and plaintive melodies of her ancestral Wassoulou tradition through an instinctive pop sensibility. At the centre of the music is Fatou’s warm, affecting voice, spare, rhythmical guitar playing and gorgeously melodic songs that draw powerfully on her own often troubled experience.

Now based in Paris, and still only 29, Fatou has had a life covering a whole gamut of contemporary African experience: fighting parental opposition to her artistic ambitions and the cultural prejudice faced by women throughout Africa, winning success as an actress in film and theatre, before finding her feet in the medium she was always destined to make her own: music.

[tube]kpLYUqJ9Y_k[/tube] ‘Kanou’, the opener, typifies the album’s minimal, yet sensual feel, Fatou’s yearning vocal and hypnotic picking – transposed from Wassoulou harp patterns – offset by muted Rhodes piano. ‘Diagneke’ underscores wry comment on a woman’s right to choose her marriage partner with a pared back funk grove, while ‘Boloco’ offsets Fatou’s heartfelt vocal on the hugely controversial subject of female circumcision with touches of exquisitely understated guitar and ngoni lute from talented young players Guimba and Moh Kouyate. The delightfully catchy ‘Sowa’ establishes a wonderfully percussive feel with just voice and acoustic guitar, the lyrics inspired by Fatou’s own painful experience of the African practice of giving children to be raised by others: ‘Before sending your children to suffer, look them in the eyes!’

Damon Albarn, Toumani Diabaté, Herbie Hancock and Led Zeppelin’s John Paul Jones are just a few of the major players who have fallen for Fatou’s effortless musical charm, as her presence has lit up shows by Africa Express, AfroCubism and Hancock’s ‘Imagine’ project. Yet her debut is almost entirely her own work: self-composed and arranged, with her own backing vocals and percussion. It breathes with the natural warmth, confidence and spontaneity that are the essence of Fatou.

Fatou’s EP ‘Kanou’ will be released on 9 May and features four tracks including ‘Kanou’ and a ‘live’ recording of ‘Clandestin’.