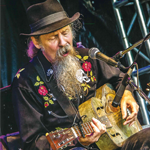 Son of a civil rights lawyer and a fiddle player, MacLean was by his early teens playing harmonica and washboard in coffeehouses and festivals, and was appearing on radio and television variety shows. In 1972 he formed a duo with another young musician, Colin Linden, (Grammy nominated producer and recent Dylan guitarist) and became a frequent and popular opener for Sonny Terry & Brownie McGee, Muddy Waters, and John Hammond.

For the last six years Doc’s National Steel Tours have been sponsored by Long & McQuade, Canada’s largest music retailer, and have featured blues masterclasses and workshops in it’s many locations from coast to coast. His intimate knowledge of the blues has also seen him featured in numerous documentaries, and in an increasing number of educational, in-the-schools presentations.

Now appearing most often as a solo performer, he is equally comfortable at a folk festival workshop, priming a rowdy blues festival crowd, or telling a story in a hushed theatre. In his father’s footsteps, Doc’s concerns for social justice have lead him to perform in the prisons, soup kitchens, picket lines, and hospices of the many communities he passes through.