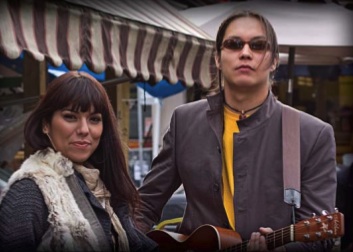 The 2016 Salmon Arm ROOTS&BLUES Festival is pleased to announce that the critically acclaimed duo of Raven Kanatakta and ShoShona Kish, known around the globe as Digging Roots, will be playing a major role at this year’s event.

No strangers to ROOTS&BLUES patrons, this award-winning team has been touring the globe the past few years, delivering their message filled, and story built songs to receptive audiences in Europe, Australia, the Norwegian Arctic, Mexico and the U.S..

The body of work for the latest Digging Roots project, For The Light, released in mid-2014, was in part inspired by their global travels and the recording mines and fuses a unique mix of roots, alternative, hip-hop and reggae sounds and grooves, with bluesy overtones.

The husband and wife team of Kanatakta and Kish will be appearing in Salmon Arm with a large ensemble, plus Digging Roots will also be the foundation for a very special thematic project that will be announced at a later date. That project will find these gifted musicians collaborating with a number of artists on material with a common denominator that focuses on the music of indigenous people on this continent.

This Juno Award-winning couple has become one of our nations’ finest musical and cultural ambassadors and at 24th ROOTS&BLUES Festival we’ll all be reminded as to why.

What the people are saying about DIGGING ROOTS: