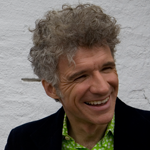 Here’s something you should know about Dan Zanes: he is passionate about making homemade family music, and encouraging his friends and neighbors to do the same.  He has a mission, if you can call it that, to introduce his musical friends to his neighborhood friends and show everybody, not just that they can play together, but that they can also feel pretty good while doing so.

Dan began his musical career during the 80’s as a member of the Del Fuegos later releasing a solo album before his foray into the field of family entertainment. In 2000 Dan released the children’s folk tinged Rocket Ship Beach, featuring musical friends Sheryl Crow, Suzanne Vega, Donald Saaf, Rankin Don and the Sandy Girls. It became an immediate hit with families all around America. The New York Times Magazine, said, “Zanes’ kids music works because it is not kids music; it’s just music—music that’s unsanitized, unpasteurized, that’s organic even.”

Take, for example, Dan Zanes and Friends’ Catch That Train!, the 2007 Grammy Award winner for Best Musical Album for Children. It is the one CD in America today that brings together the Kronos Quartet, the Blind Boys of Alabama, Father Goose, Zanes’ mother-in-law and the children of South Africa’s Agape Orphanage to sing. With Zulu folk songs, an old labor organizing tune, a song about the joys of farming the English countryside, and of course a few train songs—Catch That Train! is an engaging instrumental mix that highlights cuatros and lap steels and does not in any way discourage the use of trombone.

Little Nut Tree, which won the Parents’ Choice Gold winner in 2012, was recorded in Dan’s new homespun studio at Festival Five Records in Brooklyn where friends and guests visited to hang around and collaborate. The album features Andrew Bird, Sharon Jones, Sierra Leone Refugee All Stars and Joan Osborne. Zanes also traveled to downtown L.A. to record with the scrappy and soulful youth orchestra of the nonprofit organization The Harmony Project with whom he performed during the winter of 2010.

The Dan Zanes Gusto Hour is a chance for families and people of all ages to gather and sing at the top of their lungs with grammy award winning musician Dan Zanes. The song gusto atmosphere is loose, communal, and festive. Song books will be made available to families in advance online and people are invited to bring their instruments.