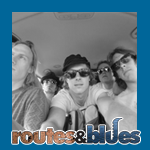 In the foreground of the ‘new roots’ front pushing out of Canada’s west coast, Current Swell is a five piece band from Victoria that is getting a lot of recognition around the world as a mainstay in the ‘surf rock’ community.  “We never called ourselves surf rock, other people did,” says singer Scott Stanton, adding that no single genre encompasses the band’s broadly sourced style. “But it’s flattering we’ve been accepted into that circle—especially being from Canada.”

“We’re a diverse bunch of cats who love having a good time onstage, offstage, all the time,” Stanton continues. “We’ve really constructed our lives on that. There’s no long-term plan. I have goals and everything, but basically the goal is to have fun. If success comes our way, cool.” Spoken like a true surfer.

Their sound continues to develop into a blues, roots, folk, rock, ska  mash-up, gaining ever more in popularity with fans while the band tours around the world, sharing stages with performers like the Beach Boys, Xavier Rudd, Bedouin Soundclash and many others.  One of the break out bands from the 2011 Roots and Blues Festival, Current Swell was a massive festival favourite and rocked the volunteer party afterwards.  Get into the groove this coming August 10th with Current Swell at Seymour Arm’s Don Fink Memorial Park.