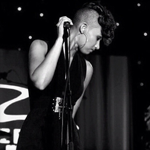 Butterscotch is a singer/beatboxer who incorporates her musical background of piano, guitar and bass into her compositions and performances. She is heavily influenced by jazz, classical, hip hop and R&B artists, ranging from Frederic Chopin to John Coltrane to Stevie Wonder. After high school she was accepted into the music program at California State University Sacramento as a Classical Piano Major, but after a couple years, since she was touring so much and decided to pursue her dreams of making it in the musical world.

Now Butterscotch is an internationally recognized vocal artist, most popularly known for her appearance on NBC’s “America’s Got Talent” as a finalist. Ellen DeGeneres was so impressed with her skills that she invited Butterscotch to perform on her show. There she amazed the crowd singing, piano playing and beatboxing. Prior to America’s Got Talent, Butterscotch claimed titles as both the first International World Female Beatbox Champion and the West Coast Beatbox Champion for both genders. Butterscotch has made such an impact on young women, that she was even the inspiration for a teenage girl to be transformed into a beatboxer on MTV’s MADE. She also performed on Tyra Banks show, encouraging another young talented female beatboxer to continue working to be on top.