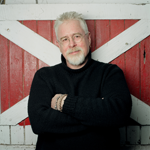 As always, there’s a spiritual side to music icon Bruce Cockburn’s latest album Small Source of Comfort, perhaps best reflected on the single The Iris of the World, which opens the album. The song includes the humorously rueful line, “I’m good at catching rainbows, not so good at catching trout.”

That admission serves as a useful metaphor for Cockburn’s approach to songwriting. “As you go through life, it’s like taking a hike alongside a river,” he explains. “Your eye catches little things that flash in the water, various stones and flotsam. I’m a bit of a packrat when it comes to saving these reflections. And, occasionally, a few of them make their way into songs.”

Those songs, along with his humanitarian work, have brought Cockburn a long list of honours, including 13 Juno Awards, an induction into the Canadian Music Hall of Fame, five honorary doctorates, a Governor General’s Performing Arts Award and several international awards. In 1982, he was made a Member of the Order of Canada and was promoted to Officer in 2002. Never content to rest on his laurels though, Cockburn keeps looking ahead. “I’d rather think about what I’m going to do next,” he once said. “My models for graceful aging are guys like John Lee Hooker and Mississippi John Hurt, who never stopped working till they dropped, as I fully expect to be doing, and just getting better as musicians and as human beings.” Small Source of Comfort, a reflection of Cockburn’s ever-expanding world of wonders, is the latest step in his creative evolution.