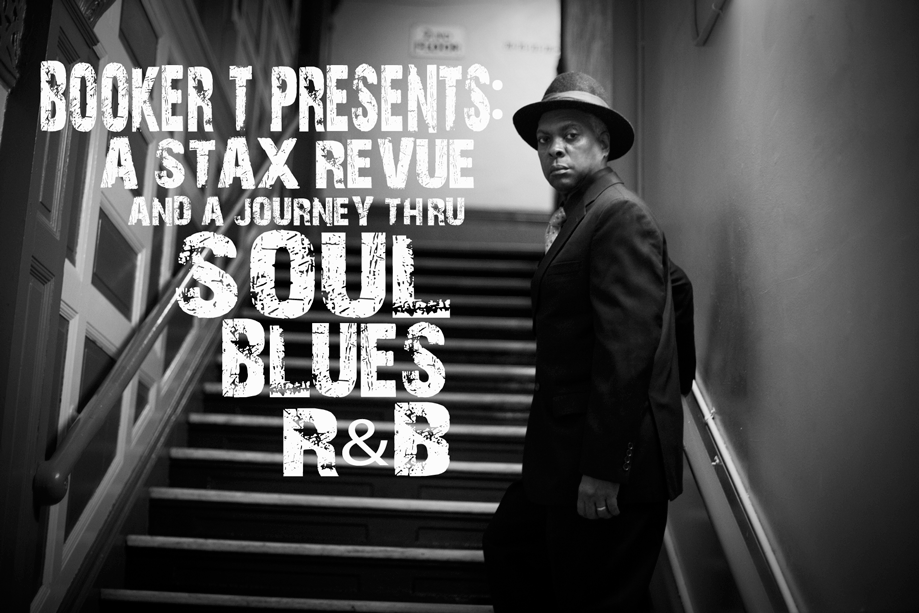 It can be argued that it was Booker T. Jones who set the cast for modern soul music and is largely responsible for its rise and enduring popularity.  On classic Stax hits like “Green Onions,” “Hang ‘Em High,” “Time Is Tight,” and “Melting Pot” the Rock and Roll Hall of Fame inductee, Musicians Hall of Fame inductee and GRAMMY Lifetime Achievement Award recipient pushed the music’s boundaries, refined it to its essence and then injected it into the nation’s bloodstream.  Sound the Alarm, the new album from Booker T, finds the Hammond B3 organ master looking ahead yet again, laying down his distinctive bedrock grooves amid a succession of sparkling collaborations with some of contemporary R&B’s most gifted young voices.

Sound the Alarm also marks Booker T’s historic return to Stax Records, the Memphis soul label the instrumentalist, bandleader, producer, and songwriter helped put on the map during the 1960s, along with his brilliant band, the MGs.

Creatively, it’s another bold new step in a career that has witnessed a striking resurgence in recent years.  Booker T took home Best Pop Instrumental Album GRAMMY Awards for both 2010’s Potato Hole, his head-turning collaboration with The Drive-By Truckers and 2012’s The Road From Memphis, his critically acclaimed album with The Roots.

He is not resting on those laurels. For Sound the Alarm, Booker T shares production chores with brothers Bobby Ross Avila and Issiah “IZ” Avila, who co-wrote eight songs and serve as the rhythm section on most of the album’s 12 tracks. The highly sought after siblings have worked with such top acts as Usher, Janet Jackson, Mary J. Blige, Missy Elliot, Chaka Khan and Earth, Wind & Fire.

“Bobby and I had previously done a little impromptu gig with El Debarge – that was the turning point when I decided to work with him,” Booker says.  “They have a different perspective about the musical palette,” he adds regarding their approach. “Their attitude is quite unique and quite innovative. That’s something I’ve looked for since I was maybe 13 or 14 years old and had figured out a little bit about music. It can be very predictable or it can be exploratory. I’m always looking for something new to do.”

For the tracks “All Over the Place” and “Broken Heart,” the Avila Brothers were joined behind the board by the legendary Twin Cities production team of Jimmy Jam & Terry Lewis.  “Bobby was instrumental in bringing them to California when they left Minneapolis,” Booker says. “Terry also contributed music and lyrics and vocal production on this album. He was very instrumental in helping choose many of the singers and direction of the songs.”

Sound the Alarm is graced with soulful guest performances by R&B stars Anthony Hamilton (on “Gently”) and Estelle (on “Can’t Wait”). Another dynamic talent, Raphael Saadiq, contributes guitar work on “Broken Heart” and “Feel Good.” Says Booker of the neo-soul star, “He’s been an inspiration for the album.”
The set also showcases a number of exciting singers who are just beginning to make their mark on contemporary R&B, including Mayer Hawthorne (“Sound the Alarm”), Jay James (“Broken Heart”) and Luke James (“All Over the Place”).

“Your Love is No More,” features the Los Angeles-based group Vintage Trouble, who also co-wrote the number with Booker T.  “John Burk, the co-executive producer of the album, took me to see them opening for Joss Stone at the Wiltern Theatre in L.A., and I just loved them,” he says. “They don’t have a keyboard, and they always say that I’m the only guy they’re going to play with.”

Sound the Alarm also features some top-flight instrumentalists from outside the soul/R&B sphere. “Austin City Blues” is a showpiece for the stunning Texas blues guitarist Gary Clark, Jr.  “Gary and I have a real thing going on mentally, kind of like what I had with Steve Cropper in the MGs, really understanding each other,” says Booker.  “He really is in my corner.”

“66 Impala,” a largely instrumental Latin jazz outing features two of the genre’s top percussionists, Poncho Sanchez and Sheila E.   “He’s holding the line there as far as Latin jazz-pop rhythm goes,” Booker states. “And Sheila has an amazing family history, with Coke Escovedo, who was with Santana, and her dad Pete. That’s the tradition that she is carrying on. She has that Escovedo thing.”

Family plays a role in a couple of other tracks on Sound the Alarm. On “Watch You Sleeping,” Booker T shares the vocals with Kori Withers, daughter of Bill Withers, whose first hits “Ain’t No Sunshine” and “Grandma’s Hands” Booker produced.  “When I came out to California, her dad was the first person I produced out here.  I went to a 50th anniversary celebration for him in West Virginia. They had a film of his life, and Kori was singing on the film. John Burk suggested that we use her on the song. Kori is very expressive. She’s her own person, and she’s a beautiful singer.”

The family tradition is also apparent with the appearance of Booker T’s 22-year-old son Ted on guitar for a gorgeous duo track, aptly titled “Father Son Blues.” After hearing Ted’s accomplished playing in his home’s family room and mistaking it for the work of blues hotshot Joe Bonamassa, Booker says, “I thought, ‘This is amazing – you can have something right in front of your own nose and you don’t see it!’”

Flush with new ideas and young talent, Sound the Alarm is also an exciting reconnection to the Stax Records tradition, which began for Booker T as a teen, when the Bluff City label was founded out of McLemore Avenue’s Satellite Record Shop.  “I found the music that I loved for the rest of my life at Satellite Records, while I was on my bike soliciting customers on my paper route,” he recalled.  “I walked into the lobby of the Capitol Theater, and it had been transformed into a record store, and there was Steve Cropper playing records for me there when I was in ninth grade. That legacy is my heart and my life. That’s where I come from.”  And, Booker adds, “I have music inside me, and I’m looking forward to the future. I’m very excited about making some things happen.”