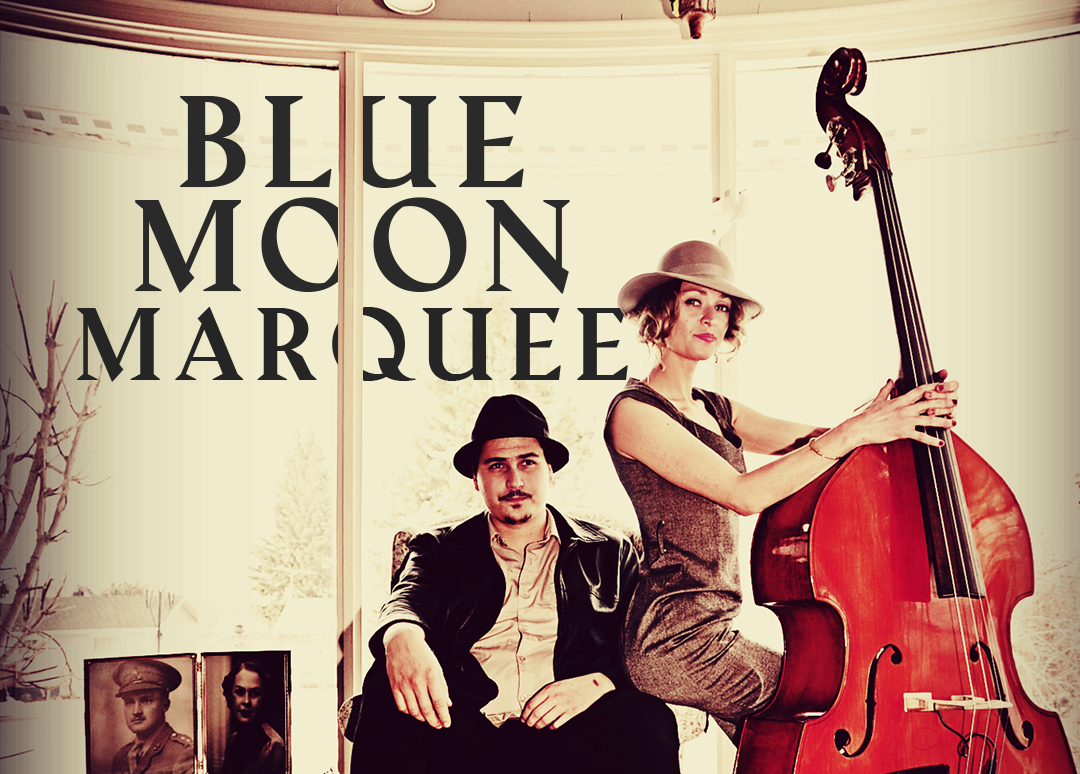 Blue Moon Marquee is a Gypsy Blues band born of the wild rose foothills of Alberta. They currently make their home in an island shack on the coast of the Salish Sea ,British Columbia. A.W. Cardinal (vocals/guitar) and Jasmine Colette a.k.a. Badlands Jass (vocals/bass/drums) write and perform original compositions influenced by anything that swings, jumps or grooves. Artists such as Lonnie Johnson, Louis Armstrong, Blind Willie Jonson, Charley Patton, Howlin’ Wolf, Screaming Jay Hawkins, Tom Waits, Memphis Minnie, and Django Reinhardt are deeply infused in the soul of their music.

Blue Moon Marquee is primarily a live duo with the energy and sound of a full band. Colette, the rhythm section, not only commands the upright bass but also brings the swing with her feet on the kick drum, snare and high hat, all while singing harmonies. Cardinal is of the screaming and hollering blues ilk with distinctive thick and smoky vocals that barrel out like a raging bull. His guitar crackles with the swinging energy of jazz tinged blues.

Appreciated for their authenticity, Blue Moon Marquee have been nominated for a Maple Blues Award as best new artist of the year, 2016. The duo were also the most requested band for the 2016 TD International Jazz Festival circuit across Canada, which they will return to in 2017. Their songs have a heavy dose of atmosphere and texture with a penchant for poet characters and gritty settings. It is this connection to the working class that draws so many people to their music, crossing many of the usual genre, age and cultural bounds. Most importantly, they make every song their own. After four years of playing together, the group has developed a distinct, personal voice that can be heard in each song. The result is an infectious mix of early blues, jazz, country, and popular songs with a contemporary and relevant feel, which is highly listenable and great for dancing. Blue Moon Marquee’s passionate performances and smouldering onstage chemistry is their trademark, and the way Colette’s tones lift A.W.’s mystique is something that enthralls audiences from back room bars to festival stages to the velvet seated theaters.

To date, Blue Moon Marquee has released three full length albums of their original compositions: “Gyspy Blues” (2016), “Lonesome Ghosts” (2014), “Stainless Steel Heart” (2013), and one online E.P. “Last Dollar” (20??). Their latest album, “Gypsy Blues,” charted at number 3 on the Earshot National Roots and Blues charts. The group has appeared on many radio stations around the world, including a half hour special/interview on Holger Petersen’s Blues Hour for CBC.