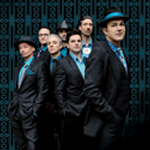 Also on board with Berlinski Beat:

Robert Soko, the godfather of the Balkanbeats scene, acting as the beat consultant of BerlinskiBeat.

Mix in a Polish bagpipe player, a German tuba player, a Czech trumpet player, a DJ from Bosnia, East and West Berlin percussionists and a singer from the royal bloodline of a gypsy king – shake it up, don’t stir, and what do you get?

An explosive cocktail of street music, club sounds, and Berlin slang belting out stories about the city at night – its smells, its ladies and retired belly dancers, its wild, frenetic, extremely danceable music, music that makes you get up and ‘move yo’ ass’.

This ain’t no Medieval Faire. This is BerlinksiBeat.

With their debut album Gassenhauer just released last summer, BerlinskiBeat is bringing its smoking hot signature sound to halls, clubs, and festivals all over the world! Strap on your dancing shoes and drink plenty of water, this is going to be a scorcher!