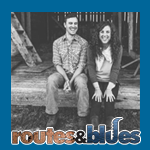 Shuswap darlings Mike Shaver and Steph Webster founded a Million Dollars in Pennies in early 2012.  The idea was based around a simple presentation; two acoustic instruments and two voices.  The band recorded their debut album a couple of months later and wanted to do something unique to present the album.  A series of ‘Let’s push the envelope’ discussions led to the duo undertaking a five-months, 8020 kilometer  cross-Canada bicycling trip last summer.  The band traveled from Victoria, BC to Cape Spear, Newfoundland, and played 30 concerts along the way.  They played their way home aboard VIA rail’s On Board Entertainment program, from Halifax to Vancouver.

Always scheming new ways to perform music while having an adventure, this summer they will portage and canoe their way from Salmon Arm to Seymour Arm where they will perform alongside Current Swell at Don Fink Memorial Park, August 10, 2013.